March through May, Yale celebrates Asian Americans and Pacific Islanders within our community. Explore the many groups, events, media, and other opportunities that celebrate our colleagues and classmates. Many thanks to Yale’s Asian American Cultural Center, Asian Network @ Yale, Council on East Asian Studies, Native American Cultural Center, Yale University Library, and many others for their contributions to these offerings.

Community members may celebrate other cultural and religious observances in May. Have we missed something? Please let us know.

at home Artists in Conversation, Yale Center for British Art 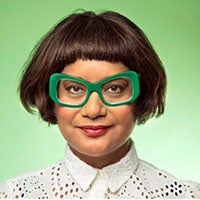 Rina Banerjee
Born in Kolkata, India, Banerjee grew up in London; Manchester, England; Philadelphia; and New York. She began her career as a polymer research chemist and later earned a master’s degree in fine art (painting) from Yale in 1995. After graduating, she taught classes in studio practice, art theory, and feminist art. Banerjee has exclusively practiced her studio art now for over twenty years. She has lent two works for display in the Center’s upcoming exhibition Art in Focus: Women From the Center that tie together themes explored in the exhibition and capture the essence of all art-making: the human imagination.

An-My Lê
Watch a conversation held with An-My Lê, is a Vietnamese American photographer who lives and works in Brooklyn, New York. Born in Vietnam in 1960, she and her family fled Vietnam in 1975, the final year of the Vietnam War, and settled in the United States as political refugees. Her photographs and films look at the impact, consequences, and representation of war, often framing a tension between the natural landscape and its violent transformation into battlegrounds.

Yale University Library
Yale University Library has an extensive collection of books, electronic resources, and special collections manuscripts related to the Asian American and Pacific Islander experience across many different topics and disciplines. These materials may be found across the Yale Library system by searching the library’s catalog and archival collections using combinations of terms such as “Asian American literature” or specific Asian ethnicities. Additionally, you may search the library’s catalog for “Pacific islands literature” or “Pacific Islander Americans.” Additional resources include:

Wonderful Books and Where to Find Them!, Saturday May 7, 11 am
The New Haven Free Public Library, in partnership with the Yale Affinity Groups, is excited to bring you this book club for families focusing on topics of social importance! This month we focus on Asian American and Pacific Islander Heritage Month with a sharing of Ohana Means Family, by Ilima Loomis. Come for the reading, stay for the discussion! Also, please enjoy the following resources associated with this event:

Asian Network @ Yale (ANY) Events, May 2022
ANY is hosting a series of events in honor of AA/PI Heritage Month. Visit their calendar for upcoming opportunities this May.

Asian American Cultural Center (AACC) YouTube Channel
Watch videos developed by the AACC on topics ranging from “On Asian Diasporic Pop Artists and Cultural World Building” to “The Latinos of Asia: How Filipino Americans Break the Rules of Race,” and more.

Also, be sure to check out the AACC’s extensive list of affiliate organizations, entirely led by students.

Asian Network @ Yale
ANY’s mission is to connect, inspire, and empower the community of Asian Heritage professionals, supporting Yale’s ability to excel in an increasingly complex, competitive and diverse world.

Native American Cultural Center
Established in 1993, the Native American Cultural Center (NACC) promotes and supports Native American, Alaska Native, Native Hawaiian, First Nations, and other Indigenous cultures and communities. The center hopes to support the Native/Indigenous community, as well as the greater Yale community, to Indigenous issues and culture by bringing programming to campus that includes events such as speakers, artist talks and installations, and conversations with leading Indigenous intellectuals. NACC also has many undergraduate student organizations that are committed to establishing and perpetuating a Indigenous presence at Yale.

Asian American Racial Justice Toolkit
Promoted by the Asian Network @ Yale, this toolkit is a project of love from the grassroots, from and by Asian American communities.

Yale NUS College
Established in 2011, through a partnership between Yale University and the National University of Singapore, Yale-NUS College is a leading liberal arts and sciences college in Asia, with a residential program that integrates living and learning. Drawing on the resources and traditions of its founding universities, a Yale-NUS education promotes broad-based interdisciplinary learning across the natural sciences, social sciences and humanities complemented by depth of expertise in one’s major.

Yale and the World
Yale’s reach is both local and international. The University partners with its hometown of New Haven, Connecticut and engages with people and institutions across the globe in the quest to promote cultural understanding, improve the human condition, delve deeper into the secrets of the universe, and train the next generation of world leaders. Learn about Yale’s partnerships in East Asia, Southeast Asia, South Asia, and more.

Image credit: Photos of Yale and China events (Yale and the World).