Explore the many groups, events, media, and other opportunities that celebrate our colleagues and classmates and raise awareness around Women’s history.

Have we missed something? Please let us know.

Explore the many groups, events, media, and other opportunities that celebrate our colleagues and classmates and honor women’s contributions to our community. 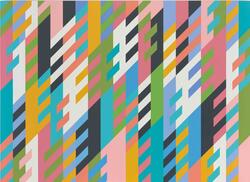 The Yale Center for British Art will present Bridget Riley: Perceptual Abstraction from March 3 through July 24, 2022. Born in Britain in 1931, Riley is among the most important and influential painters in Britain and the world. Displayed on two floors, this major survey traces Riley’s oeuvre from the 1960s through the present by featuring over fifty works that were selected by the artist in collaboration with the YCBA.

Also, revisit an exhibition hosted at the Yale University Art Gallery, On the Basis of Art: 150 Years of Women at Yale, including a related audio guide, publication, and more.

The Six Triple Eight Documentary Screening and Q&A
Friday, March 18, noon – 1 pm
In February 1945, the Allied Forces were winning WWII and liberating the concentration camps. But the U.S. troops and their families weren’t getting their mail. Enter the only all-black Women’s Army Corps battalion to serve in Europe during WWII, the 6888th Central Postal Directory Battalion or Six Triple Eight. Despite facing racism and sexism from their own leadership and troops, the women served with honor, clearing 17 million backlogged letters. They were never fully recognized…until now.

Women, Feminism, and American Medicine
Friday, March 18, 3 pm – 4:15 pm
Join the Working Women’s Network for a Women’s History Month discussion on women, feminism, and American medicine. Our guest speaker will be Naomi Rogers, Ph.D., who will discuss the feminist women’s health movement, and how it empowered women’s knowledge, regarding their health and battle against paternalistic and oppressive practices within healthcare systems.

Daily Tweets from Yale Physics Groups
Every day in March 2022
Iris Ponce, a 2nd year graduate student and Physics Diversity Fellow, and the Yale Women in Physics+ group are celebrating Women’s History Month in a unique way. Visit their Twitter accounts (Yale Physics Department and The Yale Women in Physics+ group) every day through March 31 to learn about a different member of the physics department who identifies as a woman or gender minority.

Phenomenal I Am Information Session
Friday, March 25, noon – 1 pm
Phenomenal I Am is a youth-led organization with the mission to address the emotional, social, and overall student engagement needs of “at-risk” female youth ages 9-18 of New Haven, CT.

Attendees will learn more about the importance and impact of mentoring, Phenomenal I Am’s community-based program and components, and ways to get involved and support their mission.

Twelve Portraits: Studies of Women at Yale, by Tanya Marcuse
March 2, 2020 – Friday, December 23, 2022
This exhibition hosted by Sterling Memorial Library features portraits drawn from a larger series of photographs by Tanya Marcuse (MFA ’90). The project was commissioned by the Beinecke Rare Book and Manuscript Library in honor of the university-wide 50 Women at Yale 150 celebration, which aims “to showcase the depth of women’s contributions to Yale and to the world, to celebrate women at the university, and to inspire thoughtful conversation about the future of women at Yale and in the larger society.”

Brava! Women Make American Theater
Through Sunday, July 3
In this exhibition hosted by Beinecke Rare Book and Manuscript Library, women are celebrated in every aspect of American theater making. She sings! She dances! She acts! She directs! She produces, and designs costumes, and choreographs, and researches, and writes! Women make American theater!

Women at the Dawn of History
Through Thursday, June 30, 2022
This exhibition, hosted by Sterling Memorial Library, explores the roles that women played in ancient Mesopotamia, including as authors and scholars, astute business-women, sources of expressions of eroticism, priestesses with access to major gods and goddesses, and regents who exercised power on behalf of kingdoms, states, and empires.

We Were Always Here: Celebrating ALL Women at Yale
Through Wednesday, June 1 2022
Women have always contributed to the life and history of Yale University. This exhibition honors these women — the named and unnamed, the seen and unseen, to applaud their heroic efforts that have contributed to and enriched Yale University immensely.

Organizations and Centers of Engagement

Office of LGTBQ Resources
The Office of LGBTQ Resources supports and empowers students, faculty, and staff of all sexual orientations, gender identities, and expressions to strengthen and unite the Yale University and greater New Haven community. This includes community, education, and advocacy resources and referrals for queer and bi+ women as well as transgender, nonbinary, genderqueer, gender nonconforming, gender questioning, and gender expansive people may have experienced life through the lens of womenhood in either mind, body, or spirit - past, present, future, and/or fluid.

Women and Gender Minorities in Science at Yale (WISAY)
As WISAY, we are dedicated to promoting the interests of female, transgender, and non-binary scientists and advocating for gender equality in science, technology, engineering and mathematics (STEM).

Women Faculty Forum (WFF)
WFF was established in 2001 during Yale’s Tercentennial year to highlight the importance of women faculty at the University and advance gender equity through research, advocacy, and community building.

Working Women’s Network (WWN)
The mission of the Working Women’s Network is to provide programs and resources to Yale University’s women employees, and champion the exploration and pursuit of personal and professional goals in order to enhance their individual success while also furthering the advancement of the university.

Yale Women
Yale Women’s mission is to create a vibrant, engaged community of alums, drawn together by the common thread of our Yale experiences, that is committed to advancing women’s voices and perspectives and to enriching and inspiring one another, Yale, and the world.

Belonging at Yale - University-Wide Support Resources
Every member of our community should have the opportunity to feel safe, supported, and seen. Yale has multiple resources for students, faculty, and staff who need guidance, assistance, or information; or who want to discuss or report an incident of discrimination, harassment, or sexual misconduct. Examples of these resources include: Office of Institutional Equity and Access, Resources to Discuss Discrimination and Harassment Concerns, and more.

50WomenatYale150
2019 marked two major milestones in the university’s history: the 50th anniversary of the matriculation of women in Yale College and the 150th anniversary of the first women students at the university who came to study at the School of Art when it opened in 1869. View the resources collected for this year-long commemoration. One highlight includes 150 Years of Women at Yale: Performances, featuring classical pianist Rachel Cheung ’13 MusM, a capella group Whim ‘N Rhythm, poet Li Yun Alvarado ’02, and Emi Mahmoud ’16 UNHCR, Goodwill Ambassador and 2015 World Poetry Slam champion.

Working Women’s Network (WWN) Resources
Explore a collection of resources—from films and videos to family resources—compiled by the WWN for Yale University’s women employees. The group also invites members of the Yale community to Share Your Truth.

Women at Yale: A Tour
This online tour journeys through the varied histories and iconographies of women on campus, beginning with the inception of Yale College over three centuries ago. We hope that after you take in some of the spaces, places and stories, you will continue to look for evidence of women and men co-living, co-learning, co-teaching, and co-operating here at Yale and beyond.