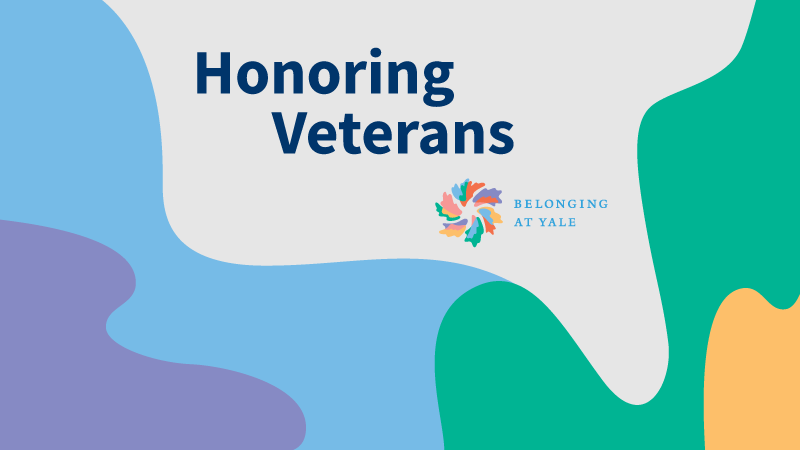 In November, Yale recognizes U.S. military veterans and their families for their service and support. Please join us for a Veterans Day ceremony on November 11, and explore additional information and related events.

Have we missed something?  Please let us know.

Visit some of the monuments in New Haven celebrating veterans across the country’s history: 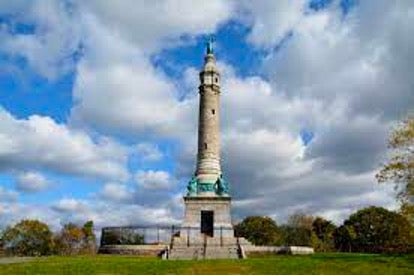 Image credit: Soldiers and Sailors’ Monument from Everyone Has a Story Blog, Jeanne Bryan Insalaco 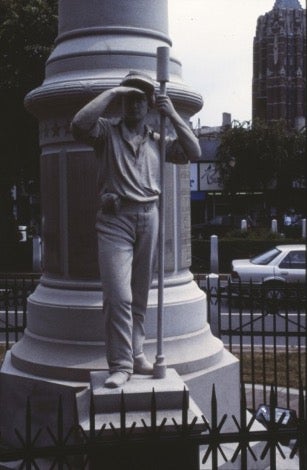 Broadway Civil War Monument at Broadway and Elm St
The Broadway Civil War Monument is the third Civil War monument erected in New Haven, CT. Dedicated in 1905 to four Connecticut regiments, the monument was supplied by Smith Granite Company and originally placed 30 feet from its present location.The statue was moved to its present location in 1928 to accommodate changing street patterns. Learn more about this monument on the Conserve Art website. 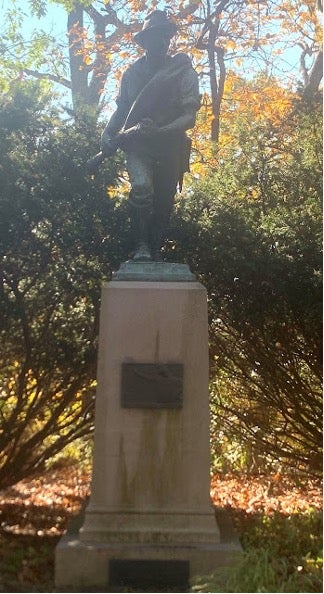 Image credit: The Spanish American War Monument with its plaques in-tact and a severed rifle, 2020, photo taken by Hannah Marcano

Redeployment by Phil Kay
This collection of short stories was awarded the National Book Award in 2014 for its view of the Iraq War and life for soldiers after it.

Risk : A User’s Guide by General Stanley A. McChrystal, US Army, Retired & Anna Butrico
General McChrystal offers a battle-tested system for detecting and responding to risk. Instead of defining risk as a force to predict, McChrystal and coauthor Anna Butrico show that there are in fact ten dimensions of control we can adjust at any given time. By closely monitoring these controls, we can maintain a healthy Risk Immune System that allows us to effectively anticipate, identify, analyze, and act upon the ever-present possibility that things will not go as planned.

Soldier Girls: The Battle of Three Women at Home and at War by Helen Thorpe
This book discusses the experience of three women deployed to Iraq and Afghanistan and the impact of their military service on their personal life.

The Dichotomy of Leadership : Balancing the Challenges of Extreme Ownership to Lead and Win by Jocko Willink and Leif Babin
In The Dichotomy of Leadership, Jocko and Leif dive even deeper into the unchartered and complex waters of a concept first introduced in Extreme Ownership: finding balance between the opposing forces that pull every leader in different directions.

See Me for Who I Am by David Chrisinger
This book of short essays shares the perspectives of twenty student veterans in an effort to bridge the gap between how Americans perceive veterans from their media portrayal and who they really are.

The Millionaires’ Unit: The Aristocratic Flyboys Who Fought the Great War and Invented America’s Airpower by Marc Wortman
This book recounts the story of a group of Yalies who were among the first Americans to fight during WWI and founded an air unit that became the founding squadron of the U.S. Naval Air Reserve.

HeinOnline Military and Government Collection
This collection brings together thousands of diverse publications related to the history, glory, might, and daily nitty-gritty of administrating America’s fighting forces. Composed of books, congressional hearings, committee prints, legislative histories, CRS and GAO Reports, and more, this database allows users to research the functions of the federal government in administrating the armed forces and the issues confronting service personnel both on and off the battlefield, from women’s changing role in the military, hollow forces, the development of new weaponry, free speech rights, and navigating benefits offered by the Department of Veterans Affairs after service.”

EBSCOhost Military and Government Collection
Designed to offer current news pertaining to all branches of the military and government, this database offers a thorough collection of periodicals, academic journals, and other content pertinent to the increasing needs of those sites. The Military & Government Collection provides cover-to-cover full text for nearly 300 journals and periodicals and indexing and abstracts for more than 400 titles.”

8th Annual Denim & Pearls Veterans Awards and Scholarship Fundraiser, Saturday, November 12, 7 – 10 PM, Knickerbocker Golf Club, 715 Sherman Parkway, New Haven, CT
Join the New Haven Club of the National Association of Negro Business and Professional Women’s Clubs, Inc. to celebrate local veterans of the armed services on their many positive accomplishments throughout their service at home and abroad. The New Haven Club will also raise funds for their annual scholarship. To date, they have awarded over $90,000 to young deserving students!

Other Than Honorable - Musical Stage Play, Saturday, November 19, 6 PM, Gateway Christian Fellowship, 129 Bull Hill Lane, West Haven, CT
A musical stage play based on the true story of a local Vietnam Veteran who has recently made national news because of his efforts to acquire rights for Veterans suffering with PTSD.

Thank You For Your Service
This movie showcases the realities of U.S. soldiers experiencing post-traumatic stress disorder (PTSD) and their efforts to readjust to civilian life, based on David Finkel’s non-fiction book by the same name.

Crisis Hotline: Veterans Press 1
This documentary profiles counselors staffing the Veterans’ Crisis Line, a moving testament to the importance of service for veterans after service.

The Messenger
In this movie, an injured army staff sergeant, recognized as a hero, returns from Iraq and is tasked with serving as a casualty notification officer alongside a recovering addict.

American Veteran
This four-part documentary series discusses the veteran experience across American history and the present-day experiences of the veterans community. The series will re-air on PBS starting on November 6.

Yale Veterans Association
The Yale Veteran Association is the Yale Alumni interest group for all veterans and currently serving members of the Yale community.

My Story (Stories about Belonging)

Belonging at Yale – My Story: Each member of our community—Yale students, faculty, staff, and alumni—has a story to tell, one more fascinating than the next. All community members, including community members who are veterans or veteran family members, are invited to tell their stories by reflecting on a time when they did or did not feel like they belonged, either at Yale or in the world. Submissions are in and our editorial team has selected the stories that are online and applied some light editing when needed. We have posted the stories in a “story map” as a way of promoting understanding and creating a community of belonging at Yale. Please explore the story map and add your narrative to this new digital library.