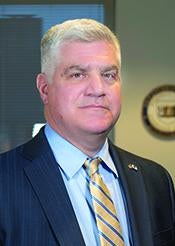 Director of Security Duane Lovello began his career with Yale University in March of 2018 as director of security operations. In October of 2018, Duane was named director of security and assumed additional the responsibilities of supervising the operations of the Central Alarm Station, Cultural Properties Monitoring and Dispatch, and Yale Transit Dispatch.

In February 2017, Duane retired from the Darien Police Department and began employment with the Connecticut Housing Finance Authority as the manager of Multifamily Portfolio Security. The portfolio included approximately 37,000 units of housing statewide.

Duane holds a B.S. degree from the University of New Haven and a Juris Doctor from the University of Connecticut School of Law. He is a member of the Connecticut Bar and a graduate of the 215th Session of the FBI National Academy in Quantico, Virginia. Duane served as the chairman of the Police Officer Standards and Training Council, president of the Fairfield County Chiefs of Police Association, and served as president of both the Darien Police Association and the Fairfield County Detectives Conference. He has developed and published numerous resource guides to assist housing providers in navigating the Violence Against Women Act and the Use of Criminal Records in Tenant Selection Policies as well as a Crime Prevention Through Environmental Design Maintenance Guide for housing providers and property managers.