C&Ts break through to career mobility at training event 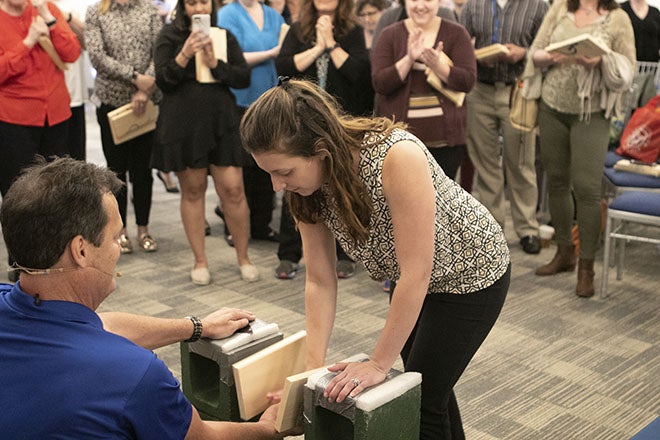 Clerical and technical (C&T) staff members were breaking through both self-doubt and slabs of wood at the kick-off event on June 5 for the 7th annual summer training program. It was hosted by Yale‘s C&T Training and Development Committee.

Laurie Kennington, president of Local 34, opened the event, which featured Rich Kuepper, founder and president of L.E.A.D. USA, a hands-on learning and professional development company.  Kuepper led the group through “The High Achievement Breakthrough” part of the day.

The C&T Training & Development Committee, which consists of Local 34 members and university management staff, aims to support Local 34 members in their continued success and professional growth. This summer the committee is offering over 60 classes that promote educational opportunities and career exploration, and offer an exchange of ideas and resources for continued career advancement.

Keith Geriak, senior administrative assistant in the Research and Teaching Unit at the School of Management, said he enjoys these courses and looks forward to learning about ways to grow professionally. He said events like these allow him to network.

“There were people there,” Geriak said, “that I had known years before and didn’t also know were working for Yale.”

The main theme of the event was to empower people to take charge of their career paths. Kuepper encouraged the participants to see the “path between the trees” as they plan their career development, to focus on overcoming resistance to change, creating small wins, and finding the opportunities, not the obstacles. “You get what you focus on,” said Kuepper, “so focus on what you want”.

Participants were challenged to step outside their comfort zones with interactive activities that were performed with plenty of laughter. One  had them extending their arms forward with their index fingers pointing out and rotating their bodies as far as possible while their feet were planted on the floor, taking note of the spot they were able to stretch to. Kuepper then asked them to close their eyes and do the same exercise in their minds, reaching and then surpassing their targets. After two more visual exercises, each time exceeding their targets, the participants physically repeated the exercise while aiming for the farthest spot they had visualized.

Michelle Privee, senior administrative assistant at Lewis Walpole Library, said this exercise made her realize that putting her mind to something will get you further than where you thought you could go. Her favorite activity however, involved splitting wood. It was the culmination of the day’s program—staff members were challenged to “break through” a one-inch slab of wood using their bare hands, testing their own minds and the barriers the mind creates.

She, along with many others, punched through these slabs on their first attempt, despite what they might have thought was initially impossible.

“We got a board and were told we are going to break it in half with our hands,” she said. “At first no one thought they could do it, especially me.”

Michelle said it only took her one attempt and although neighboring participants needed a couple of tries, everyone broke through. As the only administrative assistant in her department, Michelle is trying to apply these lessons to her position.

She said a lot of different things get thrown at her within a week and it is not good to get bogged down with self-doubt or overthinking when she must be light on her feet.

She said the lesson she took away was: “You just have to trust yourself and know that you know your job and what it is you have to do.”

The event was financially supported by the funds in the Local 34/university contract negotiated in 2017. Class offerings will run through mid August.  Visit cttraindevelop.yale.edu to view the list of classes and sign up.  C&Ts have up to 30 hours of training time each year to use as part of their contracts.