Cooking with Maria and Andrew – Don’t Crowd the Pan! 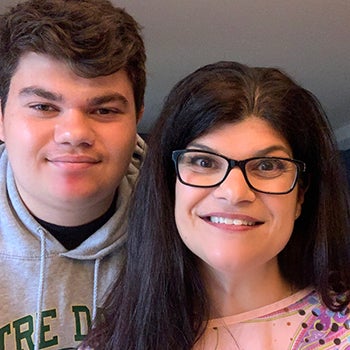 Before the pandemic hit, Maria Warner was busy working in the lab analyzing samples for organ transplant donors and recipients. When Yale shut down, that work continued, but from home. With her husband Mark, sons Andrew and Brendan, and two dogs now home together 24/7, Maria soon realized keeping everyone’s spirits up was essential. She decided to teach her older son, Andrew, how to cook. He agreed and suggested they stream it live on Facebook. Together, they began a cooking show from their kitchen that featured family recipes, lots of Nutella, hundreds of followers, and now a cookbook!

Maria Warner has been a clinical technologist at the Yale Histocompatibility & Immune Evaluation Laboratory since 2017. Born and raised in West Haven, CT, she has a Master’s Degree in Forensic Science from the University of New Haven and a Bachelor’s Degree from the University of Rhode Island. Prior to Yale, she worked for almost 20 years at a State of CT forensic science lab reviewing criminal cases. Her current work is intense and complicated involving pre-and post-surgery tests for organ donors and their recipients—for heart, kidney or liver transplants. Maria learned to cook from her mother and grandmother and fondly recalls Sunday dinners with her large extended Italian family that always involved a big pot of red sauce bubbling on the stove.

What started as a distraction, one evening making pizza and ice cream, turned into a nightly live cooking show. After the first few broadcasts, Maria and Andrew decided to cap it at an even 100 and called it “Kitchen Adventures during the Quarantine.” In the span of over three months, they made French toast (Sicilian style), cannolis, homemade pasta, grandma’s eggplant parmesan, deep fried oreos, and many recipes that included Nutella—a family favorite. They learned a few tricks about doing a live show, including needing a tripod, and got better with each event, adding music, and even having a guest chef.

Some nights, 300 people tuned in to post comments and questions. “We found many people telling us how much they looked forward to it, and how it provided a little normalcy and entertainment during the lockdown,” says Maria. During each show, Maria would sprinkle in stories about learning to cook, who a recipe came from, and how to honor a loaf of Italian bread by placing it “round side up to appreciate this gift from God.” Throughout this whole experience, they would cook, eat, report on their dog Haley’s daily misdeeds, but most of all have fun as a family. 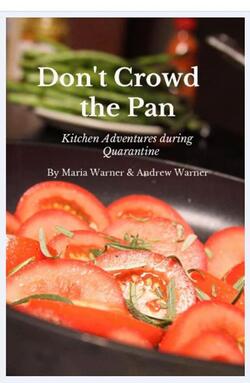 One of their fans suggested a cookbook. “Don’t Crowd the Pan – Kitchen Adventures During the Quarantine” is now available for sale online as a book or e-book. It includes 60 recipes, main dishes, desserts and more, with all proceeds going to Smilow Cancer Hospital. Andrew suggested the title because Maria would often mention that to him. “When you are cooking in oil, don’t overload the pan or the oil will cool and the food won’t cook evenly,” said Maria.  To date, they’ve sold over 100 copies and will be presenting Smilow with $1,000 in proceeds. Maria chose this charity to thank them—she was a breast cancer patient there some years ago and is currently cancer free.

To see some of Maria and Andrew’s cooking shows visit: https://www.facebook.com/maria.g.warner.