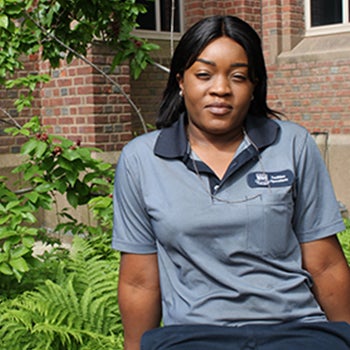 Custodian Lynda Munda Kasongo is always on the move. Her life in New Haven is not only a happy one, but a busy one! Lynda works the 4:00 a.m. – 12:30 p.m. shift at Kline Geology Lab. When she’s not helping keep the campus beautiful, she is busy being a wife, the mom of two small boys, and attending college at night.

Her journey to New Haven and Yale was not without some hardship and sadness along the way. Lynda was born in the Democratic Republic of Congo, where she lived with her parents and siblings. A civil war broke out, and both her parents were killed, forcing the family to flee and scatter. She and her sister ended up in a refugee camp in Malawi, Africa, for several years and one of her brothers is still missing. In 2016, Lynda, her husband Rickens, whom she had met in the camp, and her sister Sandra came to New Haven to start a new life.

During their first year here, they joined the First Baptist Church in New Haven where the congregation warmly welcomed them. Lynda had been struggling to find a good job when a church member told her about the New Haven Works program. The team at New Haven Works provided her with a coach, helped fine-tune her resume, and gave her helpful interview tips. Several months later she interviewed at Yale and was hired. Lynda has been at Yale in Facilities Services for just over a year now.  “I love my job. My co-workers are the best and have been supportive of me since day one. Working here at Yale is a big achievement for me,” said Lynda.

Within a year, Lynda hopes to complete her associate’s degree at Gateway Community College. Initially, she wanted to pursue a career nursing. But she enjoys working at Yale so much that she is now considering applying to one of the Facilities apprentice programs.  “I’m looking at the carpentry or painting trades, I’d like to move forward in my career here at Yale, it’s a nice place to work,” said Lynda.