Getting to know IT leaders—John Barden 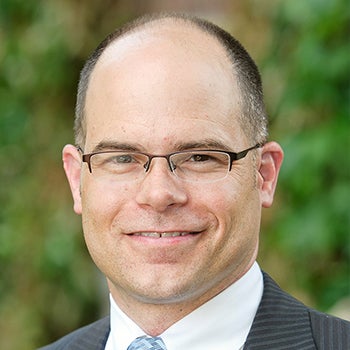 John Barden is Yale’s associate vice president and chief information officer and has been at Yale since March 2017. John was born and spent most of his younger years in Rochester, New York. Later, he lived with his family in sunny California where they had weekend adventures sailing. John graduated from Albion College in Michigan with a degree in Economics and completed his masters degree at the Simon School of Business at the University of Rochester. Weekends are spent with his wife Polly and two sons, Owen and Everett.

When I was 14, I started a small odd-jobs business — mowing lawns, raking leaves, etc. By the time I was 16, I had two partners. Among other things, I spent several summers helping one of our customers to restore an old farmhouse and build a guest house from the ground up. I learned plumbing, carpentry, and electrical work. I still use those skills to make repairs around my house.

What is one of your favorite memories from childhood?

When I was younger, I lived with my family for a few years in California. We kept a sailboat in Long Beach Harbor, and most weekends were spent sailing to Catalina Island. It was great fun. On one of our trips, the movie Jaws had just been released and was playing in the theater in Avalon. Imagine being a young kid and seeing Jaws and then going back out on a sailboat to try to sleep! I don’t think my sister, brother, or I slept at all that night.

What was your first car?

My first car was a 1973 Pontiac Catalina that I bought from my grandmother in 1986 for $200.  It was grey with a maroon landau roof and maroon velvet interior. The underside was completely rusted. When I got rid of it my senior year of high school, you could see the road through the floor.

What type of music do you listen to?

I have an eclectic taste in music. In the mornings its mostly news on NPR; spinning class keeps me current on pop music. I am equally likely to be listing to Chopin, Rush, or MO.  I’ve started to be a bit more careful,  considering some lyrics can be too adult for my 7 and 9-year-old boys.

What was the last movie you saw?

With the kids we just watched  Harry Potter and the Deathly Hallows. They are crazy about the whole Harry Potter series. A few nights ago, my wife and I watched “The Ballad of Buster Scruggs”, a typically quirky and morbid Cohen Brothers movie. The movie we most recently watched in the theater was “Black Panther”. Who doesn’t love a summer blockbuster, super-hero movie?

How do you relieve stress?

Fitness has become a big part of that for me. I try to stay fit with road cycling and early mornings at the YMCA.  Recently I’ve  started mountain biking with the boys. It’s great to see their confidence growing as they get more time out on the trails.

If you could ride your bike anywhere in the world where would it be and with whom?

I’d love to ride the Pyrenees or Alps with my brother Paul. He is a cancer survivor and several years ago after he completed his treatment he asked me if I’d “get back in the pool” with him. We were both competitive swimmers in high school and college. I did, but soon developed shoulder issues and was told to find another sport. Paul was already a cyclist, so I bought a road bike and have been riding avidly ever since.

One of the best pieces of advice I ever received was from a man named Bill Conn. He was a friend of my college advisor. I was finishing undergraduate school and weighing a few job options. One was to work as a consultant, but the offer was low, and not where I had expected to live after graduation. Bill encouraged me to take the long-term view and play it out. Bill was right - those short term concerns were irrelevant by my second year with the firm. Sometimes the right thing to do is not always obvious, particularly when it involves some patience.

What helped you develop as a manager over the course of your career?

I did a lot of volunteer work in college and started several new student organizations. Those were great early experiences in developing and managing to shared goals. During my consulting years, I had the opportunity to work in many different organizations, often with rapidly formed teams and diverse leadership styles. Perhaps most importantly, I’ve had the benefit of helpful and honest feedback throughout my career. Sometimes it’s hard to deliver and receive, but if done with good intentions and an openness to receive, it can be really powerful.

If you could solve one human problem in today’s world, what would it be?

For me, it is increasing educational access. Unfortunately, relatively few people in this world will get a high school degree or the vocational experience for a trade, much less an educational experience like Yale. But education is not only a key to economic mobility, it is also about developing a world view, citizenship, and appreciation for our differences. There is a great book I just read a great book called Educated by Tara Westover. In a very poignant way, she talks about the impact the exposure to an academic environment brings about in her isolated life, and the tradeoffs she has to make to complete that journey. It is a terrific read and her story certainly reminds me of how much potential is just waiting for the right set of experiences to release it. It is gratifying to wake up every day and know our work is contributing to that in some small way.

You can also read about a previously featured Yale leader.