Getting to know Yale leaders—Jack Callahan 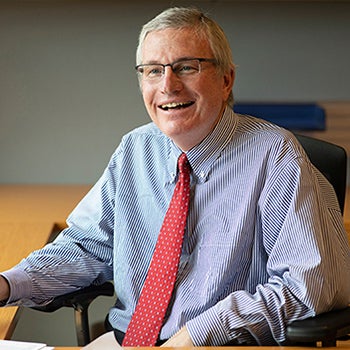 What was the last book you read?
The last book I finished was The Immortal Irishman. I read lots of history. The main character is Thomas Francis Meager who lived a very full life before he died at the age of 43—he was part of the Irish Revolt; was banished to Australia; escaped and came to America where he was an advocate for immigrants; became a Brigideer General in the Civil War’s Irish Brigade, and then served as  governor of Montana. I’m just about done reading Engineers of Victory, which was given to me by the author Yale professor Paul Kennedy. It’s about World War ll.

What do you feel managers need the most from their staff and colleagues?
What I like is honesty. Sometimes a person in a leadership position gets filtered points of view. I like honest opinions given with a level of positive intent.

What musical artist are you listening to right now?
My kids keep me a little bit current on music, so I would say James Bay. Otherwise, it is the music I grew up with—Springsteen, the Rolling Stones, Lynard Skynard, and more. I remember walking through Old Campus when I was a freshman and hearing Fleetwood Mac playing out of speakers that students set in their windows.

When faced with a challenge/adversity on the job, what do you do first?
It always happens. And over the years, you get more used to it. The main thing is not to overreact in the moment. Take time to let the situation cool down or take time to get the facts. Sometimes it’s good to get insight before making a call.

What are you most grateful for?
I’d say my wife and my kids. I got married late, in my late 30s, so I quickly went from being single to having family of five. I have three kids in college right now.

What would be your ultimate vacation destination?
I love going to Europe, just about anywhere. I lived in London for awhile. I also like being outside and we’ve vacationed with the kids in the Rocky Mountains, so I love to visit Colorado.

If you could solve one human problem in today’s world, what would it be?
One thing I would like more of is honesty and debate. Truth seems to be an elusive thing these days.

What New Haven restaurant would you recommend to a new employee?
The restaurant I missed the most when I lived in Texas, because I lived there twice, was Pepe’s. I love pizza. Growing up and going to college in New Haven meant that I went there often.

What helped you develop as a manager over the course of your career?
Resilency. Careers are marathons and I’ve always tried to be optimistic. Life is too short to be pessimistic. When you’re faced with tough choices, do the right thing. Over time, you develop a reputation for doing just that. Also, I’ve been lucky. I’ve stumbled into things along the way that have worked out better than I could have imagined. I got into Yale, which I didn’t expect, and then went to business school at Dartmouth, which helped me enormously to get focused. When I went to work at Pepsi, I met Indra Nooyi and got the chance to work with her. She has remained an advocate for my career. My job before coming here was at The McGraw Hill Companies. Everyone viewed McGraw Hill as a sleepy company stuck in the past, and we had a lot of fun changing it. I’ve definitely had my share of good luck.

What is one of your favorite memories from childhood?
My parents started taking me to Yale football games when I was five or six. It was the mid-60s. And it was always a fun time.

What stands out for you in your transition from corporate to higher education?
One of the biggest challenges coming from corporate to the university is trying to sort out the individual units, what I call all the islands in the Yale archipelago. I find that the connections between them are often inconsistent. I don’t want to change the islands because they make Yale, Yale, but I do think that the inconsistencies make life more complex than it needs to be.