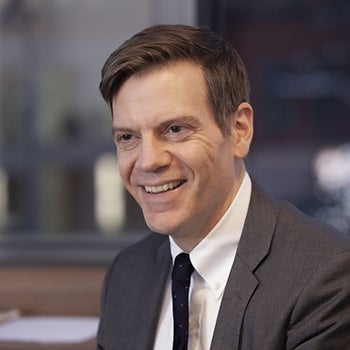 Before joining Yale, Nate had a 15-year career at the Massachusetts Institute of Technology, where he served as vice president for communications, leading a 25-person office. He helped establish MIT News, one of the most-read university news services in the country with a global audience of 500,000 monthly unique visitors; oversaw the creation and integration of modern web, social, video, and email products; and directed the launch of major initiatives.

Nate began his career in publishing and would hold leading editorial positions at Fast Company and Technology Review. Born in Boston and raised in Brookline, Massachusetts, Nate holds a bachelor’s degree in English from Beloit College. His wife, Heather Hayes, is associate dean, strategic and student affairs at Boston College Law School, and together they have one daughter, Abigail, 16.

What books are you reading or have recently read?
Just because I love it so much, I occasionally spin through John le Carré’s “Karla Trilogy,” which includes the novels Tinker, Tailor, Soldier, Spy; The Honourable Schoolboy; and Smiley’s People. Unforgettable characters in fascinating, difficult circumstances. Otherwise, I’m reading, or should I say grazing, all major newspapers every day. I also look at the Economist, and at the Yale Daily News first thing in the morning, of course.

What do you think is the best advice a manager can receive?
I’ll answer this a bit indirectly. It’s not advice I’ve received, but the example I had in my father. He was a headmaster for virtually his entire career, beginning at the age of 26, and at each school he headed, he was able to combine a clear sense of strategic direction with human empathy. Over the years, I heard a lot of stories that made me see that if you’re in a position of managing people, many of them will be very vulnerable to you at certain points. And that at these times, the right thing to do is to show compassion. My father was a strong leader, but while he was perhaps very strict about direction and motivation, he was also quite understanding about the human side of things. He held people accountable for great things, but he also was a trustworthy source of support when a person needed it.

What music have you been listening to recently?
Led Zeppelin. When I was younger, I listened to the band and liked them, but I didn’t quite understand how good they were. More recently, I’ve listened to them carefully and realized that the entire band is driven by its legendary drummer, John Bonham. He played in a particular style, called “in the pocket,” where the drumming is just slightly behind the beat. It slows everything down and creates a certain kind of sound that the whole band plays around. You can find isolated drum tracks for some of their songs, and they’re staggering. The feel Bonham had for his instrument was special.

What do you do when faced with adversity or a challenge?
I write down what principles are at stake. In my line of work, we face crises of various size fairly often. In those moments, things are usually a bit fuzzy—they’re moving quickly, and they’re ambiguous, and you risk paying too much attention to some things and not enough to others. The clarity that I have learned to seek is around principles. (For example, I might write down, “International collaboration is essential to the pursuit of our mission.”) As fast as things may be moving, or as elusive as the facts may be, you can always be sure about what you believe and what that compels you to do or say. Once you calm down and write this all down, you can behave in a way that isn’t based on fear. The fear is that you’re going to mess up or let people down. What you want to do is say, How can I lead us toward a thoroughly principled response to what has happened?

What are you most grateful for?
My family. Heather and I just celebrated our 20th wedding anniversary. She’s not here in New Haven yet, because we want our daughter Abby to finish high school in Boston first. So I’m on Amtrak trains a lot. Abby is 16 years old, and she’s terrific. Fun—but also strong. She went vegan a year ago, and she is persuasive: the refrigerators in Brookline and New Haven tell the tale.

What is your ultimate vacation destination?
I increasingly like big open spaces, so I would say almost anywhere that fits that bill. Over the years, I’ve gone to Arizona to see family quite a bit. On a recent trip, a bunch of us rode horses in the desert at sunset. I can feel it still.

If you could solve one world problem, what would it be?
Climate change, because that is about as big as a problem gets, and because the science tells us that now is the time to solve it. I think Yale can make a real difference in this area, and that is on my mind constantly. So, for that among other reasons, it’s an exciting time to be at Yale.

What has helped you develop as a manager over the course of your career—relationships, courses, making mistakes, hard work?
I have always tried to watch really effective managers closely, and to ask them questions. What I have seen over time is that the best of them are simultaneously highly stable and highly creative. Also, I try to get out of my place of employment and find out how people who do what I do in different sectors approach things: this can open entirely new ways of thinking about problems and opportunities.

What is one of your favorite childhood memories?
My mother reading to me. She is a voracious reader, not to mention a librarian by profession. She is the best-read person I know, and a real ham when she reads—accents and inflections peppering a beautiful and very correct delivery. My siblings and I were read to every night when I was little. We went through the Chronicles of Narnia and much more. It had to have helped me learn to love reading the way I do.

Please tell me about the first time you…made a mistake on the job; reached an important goal; realized what you wanted to be when you grew up; were promoted, etc.
A career “first time” was when the amazing Susan Hockfield, then president of MIT, essentially gave me leadership of communications at M.I.T. when I had little experience in such a role. I was actually really scared. For about six months, I was worried I was going to make a giant mistake, because I didn’t think I knew what I was doing. It wasn’t like I was walking into the office in abject terror, it was just a general nervousness about this steep and long learning curve.

The first thing I would say to somebody who’s in this position—and if it hasn’t happened to you yet, it probably will—is this: the person who tapped you for the role did it because he or she saw something in you. When you are doubting yourself, you have to remember that you were given this responsibility for a reason, and probably by someone who has a good track record making calls like this. You will figure it out. That’s the bet that was placed on your behalf.

Anything else you would like to say?
On your biggest decisions, be rigorous, but above all, trust your gut.