Getting to know Yale leaders—Stephen Murphy 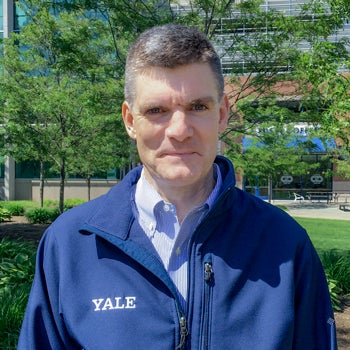 Born in New Haven, Stephen Murphy, vice president for finance and chief financial officer, lived and worked around the world before returning to work at Yale in 2001.

Steve grew up on the campus of Wesleyan University where his father held a faculty position teaching political science. Steve graduated from Yale with a B.A. in economics. Steve’s career led him to London, Hong Kong, South Korea, Thailand, and Munich. After working for the consulting firm Marakon Associates and large corporations such as Häagen-Dazs and Wilson Sporting Goods, he decided to move closer to his family and headed for Boston where he worked for small startup companies.

My first job was washing dishes in the Wesleyan dining hall for special events. I did that and cut lawns there for a few summers. It was hard work and exhausting but fun, because the people I worked with were great.

Going to football and basketball games at Wesleyan with my family. The campus was a giant playground because faculty and staff would bring their kids to the games. While our parents were watching the games, all the kids, and there were dozens of us, would run around campus playing capture the flag, kickball, pickle, soccer, or whatever. The campus community felt like a big extended family.

What brought you back to Yale?

As an alum, I would receive periodic updates from Yale. One year, a letter arrived from President Levin where he outlined his priorities, including strengthening ties with the City of New Haven, tackling long-deferred facilities maintenance, and strengthening science. I was inspired by what he wanted to do, and I figured Yale might need financial professionals to help accomplish this. In 2001, I was in the middle of job hunting and received an offer from MIT. The same day (yes, the same day!), I got a call from Yale for an interview. Like many people I’ve talked to since then, the hardest part of my job search was getting an interview at Yale. So, I held MIT off and went to New Haven for the interview. Yale hired me as the Director of Finance and Administration for the Office of Cooperative Research—they manage the patenting and licensing of Yale inventions. Eighteen years have flown by since then.

I love to read: history, religion, science fiction, satire, Calvin and Hobbes.  Thank You for Smoking by Christopher Buckley, Dune by Frank Herbert, and Mere Christianity by C.S. Lewis are a few of my favorites. I recently finished volume two of A Marginal Jew: Rethinking the Historical Jesus. Three volumes to go.

A great weekend is being at home with my wife, Vicki, our daughters, Abigail and Julia, and our dog Seamus—reading, playing fetch in the backyard, going for a hike or a run, or watching a movie or a soccer game. I love soccer! I also love visiting my family in and around Boston.

From J.R.R. Tolkien’s The Fellowship of the Ring.  I’m paraphrasing: we don’t get to choose the time we live in; all we have to decide is what to do with the time that is given us.

What is the biggest challenge today of working in Finance?

I think the biggest challenge of working here is the complexity of Yale. It is complex in terms of the scale and range of things Yale does. This complexity shows up in the number of things you need to know to do your job as a finance professional – like sponsored research, gifts and endowments, or medical services, to name a few. The complexity shows up in figuring out how to design a career path for developing as a finance professional. Most financial staff at Yale work in small groups. In a given area, there might be one or only a few financial professionals – or finance might only be a small fraction of someone’s job. That can be a challenge for someone who wants to learn and grow as a financial professional. To become a really strong financial professional you need different experiences working for different people in different settings. Here it can be harder to get that type of diversified experience. It’s doable, and the good news is that there are a lot of ways to do it at Yale. It just takes a more concerted effort than it might in a company with clearly defined career tracks.

If you weren’t working in Finance what other job would you have?

I enjoy writing. I’ve never had anything published, but I would want to do more of it and see what’s possible.

What was your first car and what happened to it?

My very first car was a red Volkswagen Bug with a black vinyl top. It was really my mom’s car. I totaled it on my way to a U2 concert at the New Haven Coliseum. I was about 17 at the time. I still went to the concert. A friend helped me push it off the road. I didn’t tell my parents the car was wrecked until the next day. It was a great concert. We were in the 10th row, and I could see Bono’s sweat. Every year for Christmas my mother gives me a VW-themed gift like a key chain or toy car.

Words of wisdom for someone wanting a career in Finance at Yale.

To be successful here, you have to believe in the mission. If you don’t believe in the mission, you are not going to enjoy the work because it’s simply too hard and complicated. Working here should feel good in the quiet of your heart, knowing you are contributing to a place that is trying to make the world a better place in fundamental and important ways.

For people considering a move from the private sector into the university I talk about three major differences that can be a challenge in a transition:

For people on the inside, I’d say, find jobs where you can learn a lot and grow. You should always be learning and growing. If not, work with your manager to figure out what you can change in your current job so you can keep learning and growing.  Try out different roles, in different departments, with different people. This will make you stronger. Also, try to find people you enjoy working with, because that makes all the difference. Finally – and by that I really mean, first and foremost – work hard, act with integrity and honesty, and treat people (everyone) with dignity and respect.

In the end, if you are working nobly toward a noble purpose, with people you enjoy, that seems to me to be the recipe for a life well lived.