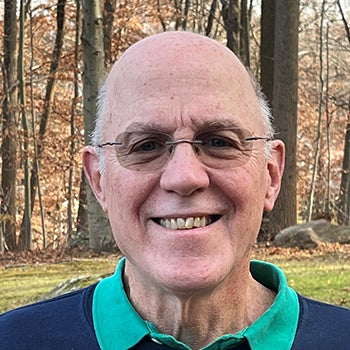 Ed Frey, Associate Director of Procurement, is ringing in the new year by retiring from Yale in January. He has held many interesting positions over the years, including elementary school teacher, computer programmer, information technology (IT) project manager, and more. For the last ten years, he has worked closely with IT senior leaders to procure the right equipment and services for the best price possible.

Before coming to Yale, Ed worked at Merrill Lynch (ML) in New York City. He started in computer operations in 1980 and transitioned up through the ranks into Program Management, where he was involved with implementing major IT projects. In 1998, Ed worked on testing the implementation of the European Currency Unit (Euro) into ML’s applications, which affected about 50% of their portfolio. The next year, ML used the blueprint developed for that project to test the entire applications portfolio for the Year 2000 problem also referred to as the Y2K glitch.

Subsequent to the Euro project, Ed started working on a project to implement a job posting system at ML, similar to STARS. Due to Y2K, ML had no time to build an application, so they contracted it out. This experience started Ed’s transition into IT purchasing and vendor management.

In 2003, General Electric recruited Ed to work for them in their Consumer Finance division, where he managed contracting of offshore vendors providing IT development and support services. Ten years ago, after consulting for a few years, he came to Yale to oversee IT’s Vendor Management team, supporting all IT purchasing.

As a result of a reorganization a few years ago, Ed was moved into Procurement in the Finance Division where he continues to support purchasing for IT, now focused mostly on software. This reorganization has helped him better serve the IT community. By working more closely with IT leadership, he is able to understand strategic plans and help directors and departments purchase the best products, not just the best-priced products.

“All those years I worked in IT helped me to support IT purchasing today. I know the drill and know what goes on when putting complex projects together. My experience gave me credibility. I don’t come in strictly from the cost angle and say I’ll save you money. I’m more hyper-focused on picking the right product/vendor and then getting the best price for it,” said Ed Frey.

We met up with Ed recently as he winds down his career and starts to think about retirement.

What is your best Yale memory?
Some years ago, I was volunteered to speak at an event called Pecha Kucha. You had to present 20 slides in 20 seconds each. Previously, I had been to a presentation given by Stephen Murphy, Vice President for Finance and Chief Financial Officer at Yale. During it, he talked about us being exceptional stewards of Yale’s resources and the importance of our role for the good of all of us at Yale. I based my presentation on that statement. I gave it like a dynamic Baptist minister and infused it with lots of humor. It was well received and fun to do. Steve graciously agreed to participate as the central character in the presentation, which made it extra special.

What advice would you give to people just starting a career at Yale?
Yale is truly a special place to work, so I’d say understand that and treat it that way, and you’ll enjoy it. It’s been an honor and privilege for me to work here.

I understand you are on phased retirement. How has the process been?
It’s a good program. I’m on the last few months and honestly running low on energy. So, this came at the perfect time, and it does prepare you for life after retirement, or at least gives you the chance to contemplate it.

What are you going to do in retirement?
My wife and I are going to move to Greenville, South Carolina. We are currently building a house there. The climate is milder, and the town has a lot to offer; there is a bicycle trail and mountains nearby for hiking. We hope to spend time exploring our new home state!

What will you miss most about Yale?
The people. I think a vast majority of the people who work here are here for the right reasons. They genuinely have Yale’s best interest in mind. More than any other place I’ve ever worked, the people here are focused on the place and making it run right. There is a lot of integrity in our community.

Fun fact most people don’t know about me?
My wife and I adopted our two children from Russia in the early 1990s. When we went to pick up our daughter in October, 1993, we were there days after the short-lived insurrection by then President Boris Yeltzin.  It was an eery and somewhat scary time to be there – like walking into history.