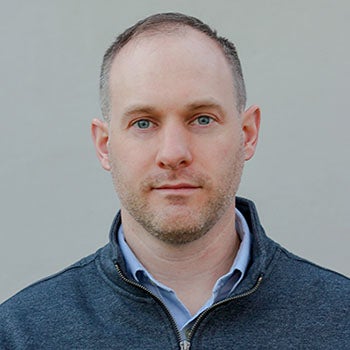 IT Manager Jeff Goddu understands the value of being self-sufficient and helping others. After graduating from college, he worked for a small computer company that developed medical record software that converted paper-based records to electronic systems. Fresh out of college, he was their only support person with clients throughout New England.

During those “crazy” two years, Jeff installed computers and servers, ran network cable, provided training, and had to contend with a rickety, old company van that often broke down. This on-the-job experience was invaluable to his career, and he learned to be self-sufficient, problem solve in sometimes tricky situations (including major van breakdowns), and work independently.

Next came a Distributed Support Provider (DSP) position at Yale and a vastly different but equally positive experience. As a DSP, Jeff was exposed to other aspects of IT, provided support and guidance, and realized he liked to help people and solve challenging issues. He continued as a DSP for several years supporting departments around Science Hill—at one point occupying a small office in the Yale Peabody Museum of Natural History.

Jeff enjoyed working with a wide variety of clients, from research laboratories to museum curators, and he also found great support from the other Yale IT technicians. Always looking to learn more and advance his career, Jeff heard about a 6-month rotational development program. He signed on and worked as a technical analyst for Public Safety IT, eventually getting hired permanently.

At Public Safety, he managed the application and server infrastructure including the campus-wide video surveillance system. He also supported the Yale Police Department’s dispatchers, detectives, and police officers, maintaining body cameras, in-car computers and other critical systems. It was for Jeff “an exciting environment and engaging” job.

Last summer, he transferred to the Yale School of Nursing as their IT Manager—a promotion. While he wasn’t looking to move, he had begun to feel he had done a lot of hands-on work and troubleshooting issues and that maybe it was time to use those skills for developing and implementing larger projects. In this new role, he hopes to make the department more efficient by leveraging IT projects or programs, and he has spent the last few months understanding the different facets of the school and researching where efficiencies can be made.

We recently caught up with Jeff to discuss some good advice, the uniqueness of being a DSP at Yale, and arcade games.

What are you working on right now?

I’m finalizing plans to upgrade the Yale School of Nursing’s classroom technology. This upgrade will provide a better teaching and learning experience and improve our hybrid accommodations. It will also enhance our support capabilities by allowing us to remotely monitor equipment, proactively identify and quickly address issues in the learning spaces. We are also in the early stages of launching a new online degree program. I’m currently working with various teams in ITS to integrate this new platform with existing student systems.

My best childhood friend lived a few houses away. He and my brother both played guitar and I played the drums. We would hang out in my parents’ basement where we had all our music instruments, a pool table, pinball machines, and arcade machines. It was an ideal hangout for a bunch of kids. We spent a lot of time down there writing and recording songs, eventually forming a band and even played a few shows including Toad’s Place in New Haven.

I guess it isn’t just one singular memory. Working as a DSP allowed me to meet amazing people with vastly different areas of expertise. I could be supporting a machinist fabricating lab equipment, or museum staff preserving specimens’ or research staff studying microscopic marine colonies. I even had to dress in a clean suit to go into the School of Engineering and Applied Science’s cleanroom to repair equipment a few times. I always spent a few extra minutes to learn and ask questions about the work being done by the people I was supporting. Getting a peek into these different worlds around campus has been one of my favorite things about working here. 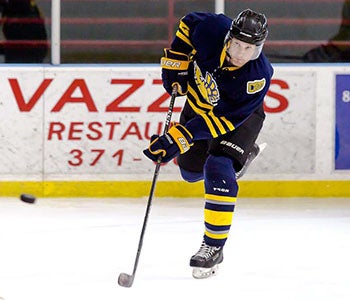 Advice you’d give to someone getting into an IT career.

I find that most people who work in IT genuinely love solving problems and helping others. If you have those attributes and the drive to learn, you will be well suited for a career in IT. Also, I would say always keep an open mind and embrace change.

Few fun facts about yourself.

I have a beautiful, and very supportive, wife, two amazing children and a lot of hobbies! I play in a few different hockey leagues, play the drums, golf, brew beer, collect and repair arcade machines from the 1990s era, and design and sell custom printed circuit boards. I’m constantly trying to learn and teach myself new skills.