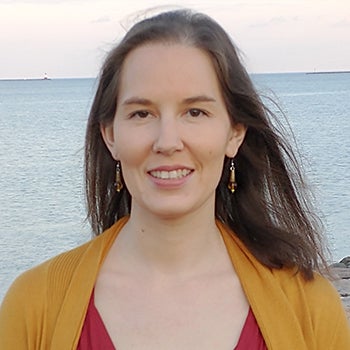 Kathleen Omollo, Director of Health IT Strategic Portfolio Management, in the department of ITS Medicine & Health, spent much of her childhood in upstate New York and the surrounding areas, or as she says, “along the Erie Canal route.” If you were to draw a line on the map between Albany and Chicago, there’s a good chance she’s lived there.

Kathleen spent most of her adult life in the Midwest - Hope College (in Michigan) for undergrad, to Chicago, and then to the University of Michigan as a graduate student and staff member. During her 12 years at the University of Michigan, she gained an appreciation for the role of higher education and the differing perspectives of education, research, clinical, and administrative groups and had roles in each of those types of departments.

In 2019, she was looking for a change. She had wanted to move back east for a while and was considering changing institutions or sectors altogether. When an opportunity arose at Yale, she was thrilled. “I was inspired at the prospect of joining the health IT team here and shaping the way that IT supports and partners with the health campuses. The interprofessional environment of the department and the intellectual rigor of Yale were enticing. It struck me as a very purpose-driven organization, and I have found that to be the case.”

What is your current role at Yale?
I joined Yale in January 2020, as Director of Health IT Strategic Portfolio Management, in the department of ITS Medicine & Health. My primary focus at the time was on bringing together technology services and strategic planning for the health campuses, including the Medical School, the School of Public Health, School of Nursing, and Yale Health. This includes bringing awareness of what we offer, how we spend money on technology, and aligning those with the priorities of health stakeholders.

In May of last year, my role shifted significantly to focus on the public health infrastructure of the institution and supporting the COVID testing analytics, which expanded into COVID contact tracing analytics, then to flu, and then even further to COVID vaccination analytics.

ITS as a whole has been heavily involved in the return to campus technology infrastructure, with at least one of four people in ITS having been involved in one way or another, whether it’s been in early planning discussions, thinking about messaging, website and software development, or more ongoing roles like supporting hardware. Our DSP team has been fantastic in supporting test sites across campus. The number of test sites has fluctuated over time, throughout academic semesters and breaks. As sites open and close, they’ve been there ready and eager to help, providing support seven days a week.

We currently have 12 test sites, and at the peak, we had 16. Our test sites have consistently performed over 12,000 tests per week, and with each of those tests comes a lot of behind-the-scenes technology and data.

This experience has allowed me to learn a lot about Yale Health and has given me an even greater appreciation for what they do for our Community. I’ve also gained a better awareness of ITS. As a new staff member, I had to quickly learn the different systems, the policies we must abide by, what we can build versus adapt, and so on. It has been an incredible, positive experience. I’ve found the IT culture to be approachable and nonterritorial, despite being a fast-paced, at times high-stress environment in which many roles intersect.

What have you learned from your experience over the past year, and where do you see your role heading?
One of the many lessons we learned is that we underestimated the need for public health infrastructure. We were able to effectively bring together a lot of systems to make this reporting possible. If we had to do it again, we now know how to structure it differently to make it easier to scale. There have been major changes in how we work together and how decisions are made. We’ve learned the importance of having cross-campus contingency committees and planning groups in place to bring together people from different areas such as Facilities, Student Affairs, Graduate Housing, Public Safety, etc. The people structure that has come out of this has been valuable.

Much of the work I’ve been doing since May 2020 has been relevant to projects that we had planned prior to COVID, so it has been really nice to see this unexpected shift in focus provide us with the practical skills to leverage things that were part of our previous strategy. One of our new initiatives is the School of Medicine Analytics Center of Excellence. Over the past few months, the Center has had two project kickoffs: faculty affairs and education reaccreditation.

For health IT overall, we’re entering a new phase of collaboration, including a new organization that that bridges the technology services and talent across the health campuses. Our associate CIO for Medicine & Health, Ted Hanss, started a new position as Health Sciences CIO. The Analytics Center is one of several new initiatives for that organization.

What is your favorite part about working at Yale?
Even though we aren’t currently on campus, I still feel connected to the mission of Yale as a major university – with influential thought leaders in education, research, and patient care. I’m amazed at the breadth of activities that take place and Yale’s rigor in all of them.

In my personal experience, I’ve found Yale to be challenging but productively challenging. There are high standards but, overall, people are approachable and supportive in helping you reach those high standards.

What is the best advice you’ve ever received?
The most practical, and maybe the funniest, advice I’ve received came from a woman I worked with about 12 years ago. “Don’t forget to breathe and don’t forget to go home.” It’s so important to remember, especially in environments where we tend to push ourselves to the limits. Don’t forget to do the simple things.

I’ve spent some time living abroad. My most extended stretches abroad were four months in Switzerland as an undergrad and then 18 months in Ethiopia later on. Much of my earlier career - eight years - in higher education focused on international partnerships for health education and policy with peer universities and health institutions in five countries in Sub-Saharan Africa. During my professional career at Michigan, I traveled to those countries (and others) for projects. My husband is from Kenya, so while I haven’t lived there, I’ve spent some time there.

My parents owned a Christmas tree farm when I was a teenager. While many people think that would be fun, it was year-round work for my brother and me. Our dry humor about our discontentment with the farm did not amuse our parents, but it did inspire our creative friends and relatives who occasionally helped out during the holiday season. Some of them wrote a parody of The Lorax, with a character who speaks against (rather than for) the trees – which became a book, an audiobook, and a video. Another created a computer game about completing different levels of tasks at the tree farm. My parents sold the farm years ago, but I still have the book, audio, video, and game inspired by the farm years.