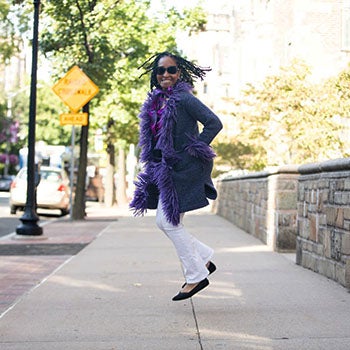 They say that home is where the heart is, and for Wendy Battles, that is in Bergen County, New Jersey, where she was raised and met her lifelong best friend in a preschool classroom 50+ years ago. At 15, Wendy and her family moved to Minnesota, where she had her first run-in with the extreme cold! She called Minneapolis home until attending college just outside of Chicago, Illinois.

It wasn’t until her grad school years that she made the Elm City her home. She planted her roots here and never left… or at least never strayed too far. She and her husband now call the suburbs of Woodbridge home, where they currently work side-by-side—compliments of the pandemic.

Wendy got her first “taste” of Yale while working as a management consultant on Project X. She then tested the waters in other fields, including learning and development, independent consulting, and health and nutrition coaching. While she loved many aspects of these professions, she longed to work as part of a team once more.

She found herself right back where it all began, in 2008, as a Yale staff member, working in Change Management. But by 2019, Wendy was ready for a change. After 11 years, she thought it would be a good time to stretch her skills and try something different. She had grown to love Information Technology (IT). Still, she didn’t possess the “techy” skills required for many IT roles, so when Information Security created the Cybersecurity Awareness Advisor role, she knew it was the role for her.

In this role, she and the other Policy & Awareness team members help increase cybersecurity awareness across Yale. They strive to make systems safer by changing behavior in simple and engaging ways. They are currently gearing up to launch an official cyber awareness program this spring.

Although spreading cybersecurity awareness keeps her plenty busy, Wendy’s ambitions reach far beyond her role at Yale. In September of 2019, Future Leaders of Yale (FLY) invited Wendy to participate on a panel about personal branding. In preparation, she started listening to a podcast called “Package Your Genius.” According to Wendy, this podcast led to an epiphany. “It was all about what it is that makes you shine. We all have something. I always knew I shined at public speaking, and one day while meditating, I heard “reinvention rebels” in my mind. I didn’t know what that meant at the time or what it would turn into, but I knew I had to do something with it.” It came together when Wendy launched her very own podcast, Reinvention Rebels, in October 2020. The podcast aims to celebrate, illuminate, and elevate women over 50.

“I’ve always loved empowering women. Given the challenges during the pandemic, it’s a positive and energizing way to contribute. Many of the women I interview have faced and overcome challenges. I love to share their voice and stories. Listeners can see a part of themselves in others’ stories. There aren’t enough resources focused on empowering midlife and older women. It’s wonderful to help change the narrative about what’s possible as we age.”

While Reinvention Rebels’ target audience is women age 50-90, the podcast has struck a nerve in men and women of all ages. Wendy is honest and transparent in sharing how she found her true self at 54. Her inspiring and heartfelt interviews have built quite the following. 82-year young Millie, for example, shares how she reinvented herself from a nun to a nightclub singer. With her number of subscribers and downloads on the rise, she now begins every weekday at 5:00 a.m. in her in-home studio, aka converted walk-in closet, where she works on upcoming interviews and episodes before starting her Yale workday. “I’ve found a way to make this work, and through this experience, I have found my tribe. I’ve found a whole group of women who are encouraging and inspirational.” But Wendy doesn’t plan on stopping here. Her goal for 2021? To do a TED talk.