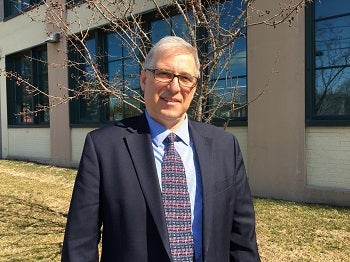 Lou Tiseo, senior director of Foundational Technology Services, grew up in Astoria, Queens, New York surrounded by a large, close-knit, Italian-American family that included 45 cousins who lived within a two-block radius. He graduated from SUNY Farmingdale State College in Long Island, NY with a B.S. in Mechanical Engineering Technology and from Ashford University with a B.A. in Organizational Management. After stints at Oracle, AC Nielsen, and Grumman Aerospace where he was a prototype engineer on projects such as the microwave landing system for the Space Shuttle and the radar jamming system for the B-1 bomber, Lou came to Yale in 2008.  He lives with his wife Amy and son in southwestern Connecticut.

When I was 14, I started working Saturdays for my dad who owned an Italian delicatessen. I would sweep floors, make deliveries, and stock shelves. My father worked mostly seven days a week and never took a vacation. He taught me not to be afraid of hard work and always strive to make my dreams come true. He would say if you go the extra yard that’s how you will be successful. I think because of his advice and encouragement, I was the first person in my family to go to college.

Besides the time I inadvertently locked my dad in the walk-in freezer… my best memory revolves around my large extended family and Sunday dinners at my grandmother’s. After church, I’d help her make the homemade sauce and pasta, and at 3:00 p.m. everyone came by and we spent the rest of the day eating and talking and eating and talking. Good times.

I like using my hands and building things from nothing to help me relax. I like puzzles and am a big Lego person. We have a room in our house with shelves of Lego architecture sets I built with my son—the Louvre, the Trevi fountain. Last summer, I carved my first totem pole in honor of my son. I was inspired after reading a book called Doc’s Story: The Hole in the Wall Gang Camp and Its Totem Poles written by the late Dr. Howard Pearson.

The perfect weekend is watching movies with a big bucket of popcorn. Last one I saw was “Bohemian Rhapsody.” I never miss any Marvel or Avenger movies! Every year I also attend Comic-Con in New York City. I used to collect comic books and at this event they feature a lot of lesser known comics, it’s a big draw for me. I take my son and we also stop by to see my family; my mom and sisters still live on Long Island.

When I was at ACNielsen, Robert Lievense, the Chief Operating Officer, took me under his wing. His advice at that time, it was the mid 90s mind you, with technology changing so quickly maybe I should take a leadership path. He guided me towards the opportunity of leading a team of 50 people consolidating networks across eighteen European countries. During the project I lived and worked, with my family, in Belgium for a few years. From that point on my leadership career took off.

What is the biggest challenge today of working in IT?

Keeping pace with the constant change of technology, which at times happens daily. The hardest thing is knowing when is the right time to make those changes. You must stop and think about the impact of those changes to the clients, the effects of change management, when releasing new types of products and services. Trying to keep pace with all of that is difficult and is not going to get easier.

Words of wisdom for people thinking of a career in IT?

My son is going to college in the fall for cybersecurity. I would say to him or anyone don’t limit yourself to one specific area in IT. Give yourself a wider flavor of the IT world, maybe two or three different segments. IT is an exploding area and the biggest growth right now is in cybersecurity. Who knows what that will be in another decade. I always had a passion for engineering. So how did I end up in IT? I didn’t limit myself and opened myself to those possibilities. By doing so I took the organizational management track and found it’s something that I really love doing.

If you weren’t working in IT what other job would you have?

My life changed when my son was born, and at the age of three, we found out he was autistic, and later my family faced losing him because of cancer. He taught me a lot about helping others. I’d like to help kids with learning disabilities or who have pediatric cancer. I would love to work for a non-profit group doing fundraising or work with kids directly. Years ago, I helped found a unique hockey team called the New York Raptors. We taught kids of all ages with learning disabilities how to skate and play hockey. There are now teams like the Raptors’ all over the United States.

If you could meet one person who would that be and why?

I would love to meet Paul Newman. He started a remarkable camp in 1986 called the Hole in the Wall Gang Camp and also the Newman’s Own brand and did a lot of philanthropic work helping kids with cancer and their families. I would have loved to have met him and picked his brain about how satisfying all that was for him.

I’m not really into gadgets, I’ll text but will end up calling you instead.

If it does what it needs to do, that is perfect for me.