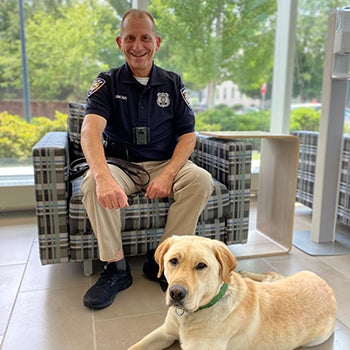 As the Yale campus slowly springs to life, many people walking about may run into Vance, the Yale Police Department’s (YPD) new service dog.  First reporting for duty in June, at just under two years of age, with a soft golden coat and gentle dark eyes, Vance draws a crowd wherever he goes, and that’s the idea. As a service dog, Vance is trained to understand 92 commands and is part of the YPD’s community policing program. With a calm and gentle presence, Vance is helping build strong bonds between the police, the campus, and the New Haven community. Most days, Sir Vancelot (his nickname) and Officer Simons can be found walking through campus making friends, calming nerves, and building bridges with the community.

His handler, Officer Richard “Rich” Simons, has been at the YPD for 27 years. Rich brought this idea to YPD leadership some years ago. “When I was first assigned to one of the colleges, Silliman, I had two Rottweiler puppies. I brought them in one day and found it was a big hit with the undergrads. I was able to open a dialogue with the students because of the dogs,” said Simons. He never forgot that experience, and a few years ago started to do some research and talked to YPD’s Chief Ronnell Higgins about YPD getting a service dog.

For almost two decades, the YPD has had bomb detection dogs, but never a service dog. This will be the first service dog for an Ivy League college police department–and the first in New Haven County. Vance came from Puppies Behind Bars, a not-for-profit that raises service dogs for first responders and wounded war veterans. The dogs are raised and trained by specially selected inmates in maximum-security prisons. The dogs enter the prisons at eight-weeks old and live there, with their trainer, for almost two years. They also receive 10,000 hours of socialization outside the prison in grocery stores, airports, shopping malls, and busy sidewalks. In addition to knowing the standard commands of fetch, salute, and sit—these dogs are trained to open doors, turn on lights, retrieve items like keys or wallets, and, most importantly, help and comfort the people that need them. 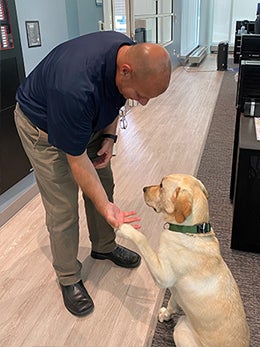 When the YPD decided to add a service dog to their ranks, they needed to assign him a handler. Officer Simons was one of over a dozen officers who applied for the position. “This is a new assignment for me. I feel like Vance has changed my life. He is so calm when you pet him, you can feel your blood pressure go down. He is so special and smart. I can’t tell you how fortunate I feel to be his handler,” said Simons. While Vance came fully trained, Officer Simons had to go through some training himself. Because of COVID-19, this additional two-week training was completed online with Vance’s handler, a female inmate.

Vance now lives with Simons and his family, including their two small dogs. Reporting to the station each day, he immediately runs to greet the other two YPD working dogs, Whitney and Blue. In the morning, Simons takes him to YPD’s dispatch area to greet the detectives and even stops by for a visit with the Chief and Assistant Chiefs. Vance and Officer Simons often walk over to Yale Health, where he brings smiles and comfort to visitors and patients. “He is more than a dog, he is like a partner and a friend,” said Simons. Off duty, Vance enjoys swimming, sitting in large mud puddles, and playing fetch.

According to Simons, about 26 colleges across the US have these types of service dogs. The University of Connecticut has Tildy, who has over 5,000 followers on Instagram. Several Connecticut police departments also have service dogs, including Groton and Naugatuck. “I think having Vance will help us during this tough time. He gives us the opportunity to reach out to the community and touch people in a way, as police officers, we haven’t been able to before,” said Simons.