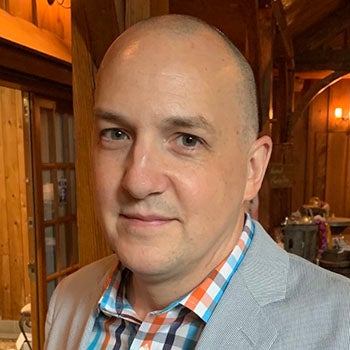 It’s a fact; Yale Police Sergeant Christopher Halstead donated a kidney to save the life of a perfect stranger. Chris came across a story on social media about a 41-year doctor from New York who needed a kidney transplant. He was deeply touched when he learned the man had an 11-year-old son. If this person didn’t get a kidney transplant soon, his life would be cut short, and his son would be left with no father. A former U.S. Army Captain, Chris jumped into action. As a married father of two, Chris could not imagine being in that situation and began researching information on transplants at once.

After learning about the pros and cons of kidney donation and understanding he could continue to function normally with one kidney, he decided to move forward. Chris reached out to the Facebook post and was contacted by the Renewal organization.

The first hurdle was determining if Chris was a match, done through a simple saliva swab. Once hearing he was a match, Chris sat down with his wife and children to talk about all of this. “My kids were nervous, but we discussed it as a family and decided to help, and I’m glad I did,” says Chris.

Chris’s story has a few twists and turns. After a battery of blood, health, and psychological tests, Chris made it through the final hurdle and was cleared physically and mentally to proceed with the donation. By this time, the person who needed the kidney, fortunately, received one from another donor. Renewal asked Chris if he wanted to remain an “open donor” to others in need. He agreed, and within a week, was matched with another man.

From there, things progressed quickly. Chris had the operation, which was successful for both individuals. He has completely recovered from the surgery and is back at work. We spoke with him via Zoom about his experience. Below are some excerpts.

What made you decide to donate a kidney?

My wife saw the story on Facebook and sent it to me—not that she wanted me to donate a kidney! However, I noticed that the man in need had a son and would not live long without a transplant, and I thought, why wouldn’t I donate a kidney? Before moving ahead, I researched and learned you could live a pretty normal life with just one. Statistically, donors live longer than those who don’t. To start with, you must be very healthy. Then, you need to make some lifestyle adjustments. I changed my eating habits, and now drink a ton of water and a little less beer.

What was the process to be an approved donor?

The recipient was registered with Renewal, who contacted me directly. Renewal helps find donors and guides you through the entire process. Also, they have funds to help pay for expenses not covered by the recipient’s insurance. For instance, my wife’s travel and hotel expenses were paid through Renewal, as the surgery was performed at New York University Langone Hospital, and she wanted to be nearby. Once matched, you go through a battery of tests, give a lot of blood, speak with a social worker and the surgeon. They want to ensure that the procedure will not negatively affect your health.

How did the operation and recovery go?

It happened quickly. I was approved in March and scheduled for the operation on May 3. I wasn’t nervous until the night before. The surgery went well; I was under about four-and-a-half hours. Dr. Anthony Watkins removed my kidney laparoscopically through a small incision in my stomach. The kidney was removed from my body, placed in a bag, transported down the hall, and placed into the recipient. I took medicine for the pain, which I needed for a few days afterward. The doctors and nurses took great care of me. Within a week, I was taking short walks, the pain vanished, but it did take a while to return to normal. The recovery on his end is different; he is on many medications to ensure his body does not reject the kidney.

I was out of work for two months. I had to, of course, receive approval to be out of work and get coverage. Typically, if you work a non-physical job, recovery is a few weeks. But because I’m a police officer and it’s more physically taxing; the recovery period is longer. The surgery weakens your abdominal wall, so you can’t run and have a limited range of motion. I was able to go on short-term disability, and Renewal helped recover any lost wages.

Have you met the recipient?

Not yet, but we hope to in the fall. He did well on his end of the operation. I understand once he received my kidney, it started functioning immediately! I like the thought that my kidney is keeping this man alive. He doesn’t have to have dialysis; he can live his life and be there for his wife and young son. Interesting side story, his wife also gave her kidney as a way of paying it forward. I’m curious to meet and talk with him. I understand that the recipient’s taste can change when they receive someone’s organ. They can develop specific tastes and effects to smells based on the donor.

Are there post-surgery risks?

When you have only one kidney, there is an elevated risk of high blood pressure. Before the operation, my pressure was historically always good. You do have to adjust your diet, avoid salt and taking vitamins or supplements. You can only take a Tylenol, say if you have a headache, but nothing else. Also, alcohol in moderation. I brew beer (chuckles) which means I also like to drink it, so I’ve cut back on that.

How does your family feel?

They are very proud of me. Also, mentally I’m very happy about doing it. I like to think I set an example for my children, that even little sacrifices for people count. My wife had to make a few sacrifices on her end, but we made it happen. Honestly, now everything is back to normal, my family is great, and I recently took a short hike. Even my scar is tiny.

What would you say to someone considering doing the same or similar thing?

Start by researching organizations that support this, like Renewal or Dove. Dove works specifically with veterans. They handle all the logistics. Of course, talk to your family. When you decide to do this, you are supported throughout the process and beyond. Through Renewal, I will be examined yearly. If any medical issues arise due to the operation, any costs revert to the recipient’s medical insurance. It is illegal in the United States to pay for an organ, but it is not unlawful to recoup any lost wages due to being a donor. I’ve learned through this process that, other than surgery, what people are most worried about is the loss of time and wages. I’m shocked at how smooth the process was and how now I feel totally fine. I’m back to work. Mentally, I feel better than before, and I lost 25 pounds, so I am healthier too!