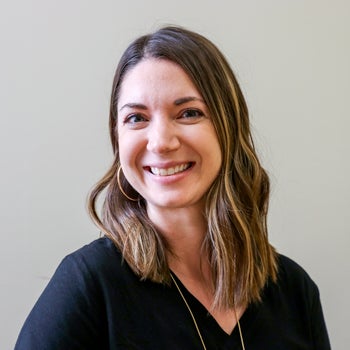 Adrienne Wilson, a benefits and absence management analyst in Benefits, was recently interviewed for the Staff Spotlight section of Inside HR&A.

How long have you been with Yale and what jobs have you held at the university?
I’ve been at Yale for just under three years. I started at the med school as an ER support specialist supporting the HR generalist (HRG) team. From there I became an HR generalist in a floater role supporting Hospitality, Facilities, and some of the professional schools. I am currently in a fixed duration assistant administrator position, in the business office that supports Human Resources, Administration, and Public Safety. I just accepted a position on the Benefits team as a benefits/absence management analyst and will start mid-September.

I am originally from Connecticut. I went to UCONN and then moved to Boston after graduating. I lived there for five years and then moved back to CT and started job hunting. What appealed to me the most about Yale was the wide range of possibilities—you could work at the med school or on central campus, work in an academic or non-academic setting—there are so many options.

If you had to describe your current role to a child, how would you describe it?
I’ll use this analogy—say you received a new board game for your birthday and wanted to play, but the instructions were long and confusing—I’m the person that helps you decipher the instructions and figure out the rules of the game. The rules often change so I need to ensure that I stay informed about the changes.

What does a typical day look like for you? What projects are you currently working on?
A good portion of my time is spent reviewing expenses. I review and approve all expenses for Human Resources. This also includes troubleshooting—for example; deciding whether an expense should be charged to a purchasing card or a PO and working with Shared Services to resolve invoice issues. This role also includes some project management. I assist the Lead Administrator with establishing and documenting new business processes and improving existing ones.

Two of the larger projects that I’ve been working on recently are the renovation of the training room at 221 Whitney Avenue (the HR building) and coordinating with HRIS to clean up and reorganize supervisory org structures in Workday.

What would you say has had the biggest impact on your career development & growth to date?
I would say my time working as an HRG. That role pushed me the furthest outside of my comfort zone. I dealt with numerous challenging situations which helped me gain confidence professionally, and I learned to ‘trust my gut’ a little more each time. After one year in the role, I realized that it wasn’t for me long term. That was important to my development because it forced me to take a step back and think about what I truly wanted to do next in my career.

What are your biggest professional challenges?
At Yale, in particular, I found coming in as an outsider to Yale to be a challenge because it is such a complex environment—there are so many departments, job classifications, systems, etc. Everything felt completely foreign to me.

In my current role, the biggest challenge was coming into the position with no financial background. Being in a business office with a heavy focus on finance, I had to work to quickly absorb as much information as possible from my Lead Administrator and team. I feel as though I’ve learned a lot about financials during my time in this position.

If you could choose anyone at Yale to switch jobs with, who would it be?
This is an easy one—Handsome Dan’s caretaker, obviously. I don’t know that my dog would appreciate sharing the attention, though.

Prior to working at Yale, what was the most unusual or interesting job you’ve ever had?
I worked in the business office at Quassy Amusement Park in Middlebury, CT throughout college and for two years after graduating. I worked in sales, booking events and cold-calling, during both the on and off-seasons. In the off-season there was an eerie feel to the place. Seeing the park completely empty and the rides covered in snow was almost creepy.

When you were 10 years old, what did you want to be when you grew up?
I wanted to be an author and illustrator. I was a huge bookworm and read all the time. I never became a writer or artist although I did major in Communications in college and I do some calligraphy now. My favorite book when I was younger was The Giver. I was also obsessed with The Baby-Sitters Club series and read every single one of the books.

Finish this sentence: “I am happiest when____________________.”
I wish I had a more exciting answer, but I am honestly happiest when I am lounging on the couch, in my sweatpants, watching TV. I tend to go for true crime shows, but also loved Stranger Things on Netflix.