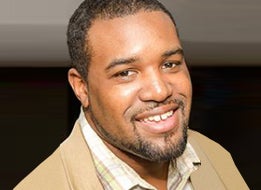 We recently chatted with Andre Griffith via Zoom, from his in-home studio in New Haven, where he and his wife, TeQua, work side by side, she on her thriving photography business, and he on one of his biggest passions, filmmaking.

It’s hard for Andre to believe that just five short years ago, he was at the lowest point in his life—without a job, unable to provide for his family, and even homeless for some time. “At one point, we were living with relatives, in one room, on a twin bed, as a family of three. I ended up taking a temporary job in New York to bring in some money. Every day I would commute from Connecticut to Manhattan, waking up at 4:00 a.m. to get on the 5:00 train, and I wouldn’t be home until 8:00 p.m. Around that time is when I applied for a temp job at Yale. We were still homeless for about ten months when we used the Homebuyer Program to purchase our current home.”

After a ten-year stint as a radio host, working award shows and red-carpet events, Andre found himself without a camera crew, and he and TeQua decided that they would learn the craft. With a $300 point and shoot camera, TeQua perfected her skill, while Andre took on video—taking an online master class and monitoring classes at YSD.

According to Andre, his love of technology has guided his career path, “I’ve always been a techie person. I love to take things apart and put them back together. Music and filmmaking are surrounded in technology.” It seems only natural that Andre’s position at the Yale School of Drama embodies all three of his passions—music, filmmaking, and technology.

Read what Andre has to say about his time at Yale, his thoughts on how COVID and how the current state of affairs have impacted his work and personal life, and what he’s learned about himself throughout his experiences.

What is your current role at Yale?

I am a Digital Technology Associate at the Yale School of Drama. I oversee technology for nine buildings and five theatres. A typical day for me involves fielding questions and requests and facilitating those requests, as well as monitoring the ticket system to ensure that any problems are resolved. I oversee rehearsal rooms to make sure technology is in order and that the staff has the software they need. I am responsible for IT support as well as audio and visual support—acting as both Distributed Support Provider (DSP) and media services for graduate students, staff, and faculty. I enjoy building relationships and rapport with my clients. A big part of my job is teaching them the “how and why” behind what I do so that they can become self-sufficient to help themselves and others, which ultimately helps me as well.

How long have you been with the university, and how did you get started here?

I celebrated my third anniversary this past May, but my first experience working at Yale was as a casual employee working the Walter Camp event, back in 1998. I attended culinary school with hopes of starting a career as a chef, and then got a job in Yale Catering, but while I was in that role, I decided to pursue a degree in software network administration. After obtaining my degree, I returned to Yale as a contractor at the School of Nursing, working on the security remediation project. From there I applied for what I thought at the time was a temporary desktop position, but it ended up being the position I hold today.

How has the COVID pandemic impacted your work?

The pandemic has increased my workload. Early in the pandemic, I realized that we had to design emergency modules to operate offline—not necessarily COVID specific, but also for weather and other emergencies. We had nothing, so I pitched the idea. Once it was approved, I started writing instructions and modules on things like how to use Zoom, or how to get into VPN and use multi factor authentication. I had the idea to create a subsite on the School of Drama info page to outline emergency shutdowns. At the same time, we also had to get computers ready for our staff and get them set up at home. In the very beginning, around March-April, it was just an avalanche of tickets as everyone tried to acclimate themselves to working remotely. But as time went on, everyone started to figure things out and remote work became the “norm”, so the workload lightened up and we got some relief.

While working from home, what steps have you taken to achieve a work/life balance?

I am currently working a hybrid schedule—partly remote, and partly on campus. I have a daughter who is learning remotely and a wife who is a photographer and therefore can’t always be home, so I go into the office when I am able to and work from home the remainder of the time. I’ve learned that there must be a balance when working from home. There are pockets of time where there’s nothing going on and I step away from the computer to keep my sanity. If we were at the office and needed to step away, we could physically walk away and get out for five minutes, but working from home during a pandemic you don’t necessarily have that option. I’ve taken advantage of this time to learn some plumbing and electrical, and I even managed to shoot a short film called The Promotion. When things were slow, I took two days off, and shot the film over four days. I used YSD folks, the screenplay was written by YSD graduate, the production manager, costume designer, and lead actor were also all YSD grads. The film is grounded in social injustice and tells a love story in the confines of all that is currently happening in the world. This project was challenging for me. I’m not a protestor so I decided to share my voice through film.

How have your leaders or peers supported you and ensured your success?

We have a lot of meetings and check-ins, including one weekly check-in during which not one piece of business is spoken. Its primary purpose is to simply see how everyone is doing. We’ve shared ideas and tips, and when the social space got dark, it became a shoulder to lean on. It really matters because it makes you feel like you’re in a place that cares. This past summer, YSD instituted a day of reflection for Juneteenth, and when riots started they scheduled a town hall to provide a space for us to vent. YSD genuinely cares about their staff and shows it by reassuring us that they have our backs.

Nothing can happen that I can’t work through. If you have faith and the love and support of your family you can climb out of any hole that you’re in. To have no way to support your family and no roof over your head, that was the lowest I could get, but no amount of money or success would make me happy if I couldn’t maintain the happiness myself. Love of family and faith are the only things that got me through. When my girls are happy, I am happy. They can say that their dad was down for a time, but they watched him come out of it and are proud of who he has become. That’s one of those things that really gets me.