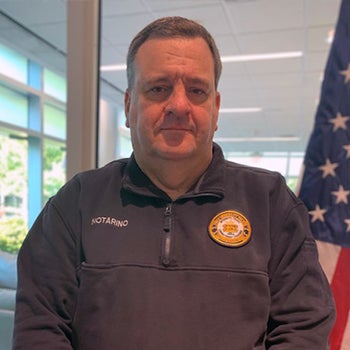 Anthony Notarino has a calm and soothing voice on the phone; he is kind and patient, making him well suited for his role as a Yale Police Dispatcher. Anthony is always willing to jump in to help and considers his Yale Police Department (YPD) team like family. After hours, his own family comes first, as he cares for his elderly parents and dotes on several nieces and a nephew. Born and raised in the Wooster Street neighborhood of New Haven, Anthony has great memories of being surrounded by family and attending Saturday night mass with his grandmother.

After graduating from high school, Anthony became a full-time drummer in a local band called The Sound Alternatives. They kept a busy schedule playing for weddings, festivals, and dances. By the mid-90s, he wanted a day job and applied for a part-time dispatcher position at the YPD. He was hired and became a full-time dispatcher in 1996. While music is still a big part of his life, helping people as a dispatcher has been his true calling. He also works part-time for the North Haven Police Department and per diem for the New Haven Police Department.

Anthony spoke to us via phone to talk about music, his family, and what it takes to be a dispatcher.

I started playing the drums when I was five years old, my parents were very supportive of my musical endeavors. When I turned 16, I started playing with a few guys in a band at local events. They were much older than me. One of them played with Glen Miller! I never really had any formal training. My dad would bring music home, and I’d mimic it. While other kids were outside playing, I was inside practicing.

What was your first drum set and what happened to it?

I got it for my birthday–it was a new black CB 700 drum set. My dad asked me to go get him a cigar out of his car. So, I walked outside and the drum set was in his back seat. I was excited and used that for many years. Eventually, I had to step up and get a better set. But I never forgot that first one!

I grew up on Wooster Square in New Haven. Most of my family lived in that same neighborhood. My grandmother, on my mother’s side, had immigrated from Amalfi, Italy. She loved going to church on Saturday nights at St. Michael’s Church, that mass was said in Italian. I’d go with her every week. Life was much simpler back then. If I could go back in time, that would be something!

What is the hardest thing about your current job?

I love my job, love the people I work with, and I have a great boss. But with all the social unrest, it’s tough right now for the police. Now when we get some calls, we are apprehensive about things more than ever because there is so much negativity around policing. I’ve been working as a dispatcher for 25 years, I see a lot of positive stuff that goes on here. You don’t hear about that. The weather can also be an issue. We come to work regardless of blizzards, hurricanes, or any other storms. I’ve had to sleep here during one bad storm. I’ve also had to answer some tough calls about missing students. You don’t forget those.

Favorite thing about your current job?

I love helping people and like a happy ending. I’ve taken suicidal calls that ended positively. It means a lot to me personally to know I helped someone. If there has been a crime, and the criminal has been caught and I assisted in that, I’m happy. I’ve had an interesting career. I can’t imagine doing anything else.

What are some of your favorite hobbies?

Besides music, I love to go to the casino to play the slots or see a concert. Also, I can take my mom because she loves to play poker. My mom and dad mean everything to me–Dad is 83, and mom is 78. My nieces and nephews are like my kids. Mom is a 15-year cancer survivor. I’m going to take care of them because they took care of me. Nursing homes are not part of the plan, I want to keep them at home for as long as possible.

What advice would you give someone wanting to become a dispatcher?

Coming into it, you must have a lot of patience and understanding. You need to remember that it may be that person’s first time calling the police. To us, it might be routine, but to them, it’s not. Also, you need to be customer-oriented and realize that not everything is always as it seems. Have an open mind. It’s not for everybody. Some calls are tough. Also, it’s important to work with a good group of people, they make the job, which can be difficult at times, enjoyable.

Yale’s 300th anniversary celebration at the Yale Bowl. It was a beautiful night. Paul Simon played and there were fireworks. Just being at Yale has been a very positive thing in my life. It’s a great place to work and enabled me to do a lot of things.

What has it been like for you during the pandemic at work and at home?

We are a close-knit family and I’ve had to keep the grandchildren away from my parents. That’s been tough. It’s stressful. I’ve been doing all the shopping, while trying to keep my parents at home and safe. As for work, my hat’s off to Yale’s leaders, our workspace is cleaned regularly, and we’ve been given everything we need to work safely and comfortably.