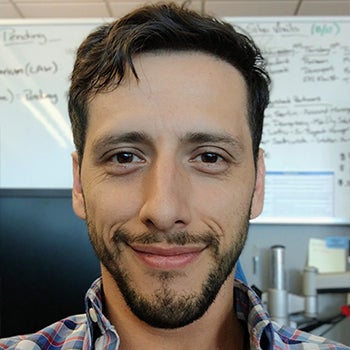 Antonio Valderrama is approaching his third anniversary with Yale. He began his Yale career as a contractor in late 2017. About a year later, he accepted a full-time position as one of IT’s five Network Operations Specialists, or as Valderrama’s wife refers to them, “the university’s mechanics of the internet.” Antonio and his team are considered part of the university’s critical function staff. They are currently rotating working remotely and on-campus to ensure that the Yale community is fully supported.

Recently, we chatted with Antonio via Zoom to learn more about him, personally and professionally.

Tell me about your current job at Yale

I work with the Network Operations department—a team of five that is overseen by David Highsmith. Our primary goal is to maintain the network and keep it up and running. We have monitoring systems in place which are continually testing equipment. When an issue is discovered, the systems alert our team immediately. We are the first ones on the scene to address the issue, and then, if necessary, we escalate any additional work to the appropriate team(s). We work hand-in-hand with the Distributed Support Providers (DSPs), Help Desk, Network Engineering, Telecom, Facilities, and Information Security to ensure that Yale’s network infrastructure is available.

What is your favorite part of working at Yale?

I genuinely love coming to work, and it’s the first time I’ve ever experienced that. My previous jobs were fulfilling, but I was never excited about them. The team I work with is incredible. I have a great boss and work with amazing people. We’re currently working on the Next Generation Network (NGN) project, which is a huge undertaking that has given us a lot of hands-on experience. It has presented us with many challenges but also with many exciting things to look forward to.

Where did you grow up?

I moved around as a child. I was born in Colombia and moved to the United States when I was a young boy, living in New York and Miami. In my teens, I moved back to Colombia for a few years before starting college in Costa Rica, where I met my wife. I was there for four years and moved back to the U.S. shortly before getting married. We lived in my wife’s home state of Maine before coming to Connecticut, moving around so much kept things interesting.

Out of all the places I’ve lived, I’d say Colombia is my favorite. I was really against moving back there at first, but eventually I came around and started appreciating where I was, why I was there, and everything about it. I grew to love it and to appreciate the people and the way of life. It is a very special and unique place.

What did you think you’re going to be when you grew up?

The first thing I ever told myself was that I was going to be a dentist. I quickly lost sight of that when, in my early teens, my interest in computers took hold. At the time, I was shadowing my cousin, who built and sold computers. This was a huge thing at the time. He let me help here and there, and it really heightened my interest. Then I started working in call centers, and my interest and knowledge grew from there.

What is the biggest challenge of working in IT today?

We live in a multi-device world, so it can be challenging to create a network that can adapt and accept all types of devices. It’s ever-changing, so we must keep the network open enough to accept all the new technology, while still maintaining security for enterprise-grade devices as well as commercial-grade devices.

We’re not only working with devices that are provided by the university, but also those that students, faculty, and staff are bringing in themselves, such as smart speakers, gaming systems, cameras, and  list goes on. We’ve even worked on washing machines!

How has the COVID-19 pandemic affected your work?

I try to look at the glass half full, so I’ll talk about the positives. With most of the university community learning and working remotely, we have made significant progress on many projects that would have taken much longer if we had to coordinate with staff, faculty, and students on campus. We’ve been able to increase the bandwidth on many of the bigger picture equipment and lay the groundwork for a lot of the broader projects we’re working towards around NGN.

On a personal level, I love that I can spend much more time with my two-and-a-half-year-old son. My wife, who also works for Yale, and I have had to adjust and modify our schedules as we go, but I think we’ve finally got this figured out. Our entire living room and dining room area has been converted into our own daycare center!

What is the best advice you’ve ever received?

The advice I received was in Spanish, so it may not translate well, but it loosely translates to, no one’s going to do it for you unless you do it for yourself. At the time, it was applied to something a little more basic, like my household chores, but I’ve found it to be relevant to many aspects of life.

What are some fun facts that your colleagues might not know about you?

I have been doing archery for about five years now. My uncle got me into it, and when he had to give it up due to an injury, he gave me his bow, and I’ve been hooked ever since. It’s my way to destress, a kind of therapy.

Another thing people might not know about me is that I used to bartend. At the time, I was transitioning between careers and needed supplemental income, so I attended bartending school and got a job at a restaurant in Branford.