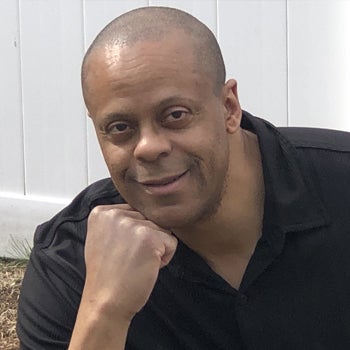 An imposing presence at over six feet tall, Captain Von Narcisse is polite, upbeat, and an inspiring member of the community. Von has responsibility and oversight for the Operations function of the Yale Police Department (YPD), including Community Patrol, Emergency Services, and Communications. This includes all uniformed patrol units or officers on foot, bicycles, motorcycles, motor vehicles, and Segways.

Von was born and raised in Tacoma, Washington. His late father, a U.S. Army Sergeant-Major, was stationed at Fort Lewis. Growing up, Von was part of a close-knit, extended family. He went to Montana State University on a football scholarship and played for three years before joining the Airforce ROTC. Von graduated with a B.S. in Social and Criminal Justice; worked as a criminal investigator and juvenile corrections officer; and became a Tacoma Police Officer. Later, he, his wife, and two sons relocated to Connecticut due to a job change. Von started working at the YPD not long after moving to Connecticut. He was promoted to captain in 2017 and has been at Yale for 12 years. His sons are now 14 and 20; the oldest is a U.S. Marine.

When I was about 12 or 13, my younger brother and I delivered newspapers. It was tough because we had to deliver 500 papers using our old, not very reliable bicycles. We only got paid one penny per paper. We lasted about a month. After that, I started cutting lawns for $5 per lawn, no matter how big. I did that for a while.

I had a great childhood, but probably what sticks out the most is when our Boys Club team (the Steelers) won the City of Tacoma football championship—I was in sixth grade at the time. We also went to Seattle and beat their club team in another championship.  Then, when I was in junior high school, our football team won the city championship. Our defense had only 8 points scored against them for the entire season that year. That record will never be broken because, not long after, the City of Tacoma took football programs out of the junior high schools. To this day, when I see people from that team we reminisce about the fun we had.

I love to write, read, and learn. I especially love reading about the American West and listening to old time radio programs like Frontier Gentleman or Gregory Hood. I also enjoy watching football and I am a huge Seattle Seahawks fan. I love hanging out and talking with friends and family. I recently wrote and published a children’s book entitled “The Forgotten Prophecy.”  It’s geared toward fifth graders and is an adventure story. It was illustrated by the very talented Michael Ferguson who works at Yale Printing and Publishing Services.

Something involving my family, the Seattle Seahawks, great food, laughter, and positive energy. The Seahawks work and play hard and for each other. When you go to a home game, there is something different and special going on in the stands with the fans. It’s like the people in the stands and the team are working together. I often feel, if we can do that there, we can do it in other parts of society, but you must be motivated.

What is the biggest challenge today of working in Public Safety?

Information moves at lightning speed and sometimes people are quick to judge before all the facts are known. There is a lot of anger out there and sometimes it is hard not to take it personally. We need to be resilient and work on our mission—the core of what law enforcement is all about. I think what gets overlooked is we are all working toward a positive goal. We need to stay the course, working one day at a time. Good will always prevail.

Words of wisdom for people just starting in their career?

Do your homework and make sure you are driven to this profession. Become a police officer if you are passionate about law and about helping people. There is a lot at stake and people are counting on you. Even after you earn a badge, you are part of a regulated profession and when laws change you must keep up. It’s an amazing profession to be a part of.

If you weren’t working in public safety what other job would you have?

I would like to think I’d be writing. I have already started working on my next book–a science fiction story targeted at adults. I also see myself coaching football at the high school level. I think lessons learned from playing on a team can be transitioned to life, such as working toward a shared goal or developing friendships.

Do you have a favorite quote?

Best advice you’ve ever got and from whom?

Before I became a police officer, a lieutenant in Tacoma told me “always remember it’s not you, it’s the uniform.”  I didn’t know what he meant at the time but came to understand he meant to stay humble, that I was representing my community, and they were relying on me to do the right thing.

What was your first car (and what happened to it)?

My first car was a1976 blue Dodge Maverick. I got it when I was a senior in high school. When I turned it off, it would cough before it sputtered out. It was handed down to me from my older brother. Then, when I went to college my younger brother got it, but it quit soon after that. That car was something else.

I’m kind of old school, I like the television. You can get a ton of channels and sporting events. You can plan events around it to have people over.  There’s something great about the gathering around it with friends and family.