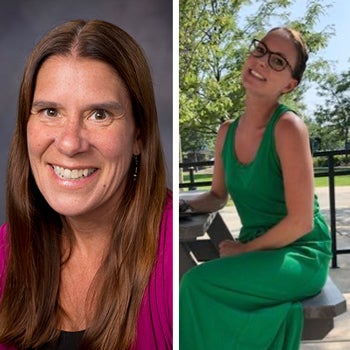 Diversity, inclusion, and equity—these are the principles on which the Yale Information Technology Services (ITS) Climate, Culture, and Inclusion (CCI) Task Force was founded. The CCI was assembled partially in response to the 2017 Workplace Survey, in which ITS staff voiced a strong desire to create a positive culture of inclusion, belonging, and acceptance within Yale ITS, and to ensure employee career advancement and representation of diversity at all levels. Now more than ever, these principles bear incredible significance, as we watch the current events unfold in our nation.

We recently had the opportunity to chat with two members of the task force, Debra Houle and Samantha Brailsford, to hear their perspectives on what they’ve accomplished thus far, and what is to come. As team leads for two of CCI’s action teams, Debra and Samantha were tasked with outlining specific and tangible goals, and creating action plans to accomplish them. With the help of Deb Stanley-McAulay, Associate Vice President for Employee Engagement and Workplace Culture, the CCI set out to establish these goals and layout a course of action. For Debra, that goal was ensuring fairness of opportunity within ITS. As she explains, her main objective was to provide diversity and inclusion (D&I) training and education to all ITS staff. According to Debra, her team sought to expose staff to training and education that would inspire necessary, yet sometimes difficult, conversations. She and her team worked diligently to identify courses that would incite meaningful discussions—the kind of discussions necessary to break the boundaries that hinder equality in employment opportunities.

Samantha’s action team was charged with retaining the best talent in ITS. “As chair of the action team I was responsible for recruiting members of ITS who were particularly interested and committed to having open dialogue around how to retain employees in our department.” Team leads worked closely with the ITS senior leadership team (SLT) to provide updates on what the task force has been working on and to obtain insight into and what the SLT is working on, and what they would like the teams to focus on next. Goals were then set, each with a six-month timeframe in mind, and a plan to reassess at that point. “Through lots of open, honest, and productive conversations within our action team, we decided to focus our proposal on ‘Stay Interviews’. The term ‘Stay Interview’ felt a little too formal and somewhat intimidating to me so we decided to change it to ‘Employee Engagement Discussions’. These discussions would create a platform where managers and employees can have one-on-one conversations to gauge satisfaction levels with the current work environment. The hope is to improve management and employee relations; creating an environment of trust and respect to support workplace results.”

Results were fast and very apparent. According to Debra, recent data shows that 97% of staff have taken the recommended training, and 100% of management have completed their required training in creating an environment of mutual respect. In addition, D&I training is now incorporated into every ITS new hire’s onboarding curriculum. The task force has received very positive feedback from participants but both Debra and Samantha admit that it’s an ever-evolving target, with goals and results being constantly monitored and reassessed.

Next on the list for the CCI? The formation of a new Action Team—an outlet for ITS staff to address systemic racism. As Debra notes, “both nationally and locally people are talking about systemic racism. People want to talk about what is happening in the world and are looking to CCI to have these conversations about what is happening nationally as well as within Yale and ITS.” This Action Team is being assembled in response to staff feedback received at a virtual wellness check-in, held on June 12, 2020. Over 90 ITS employees were in attendance, a number which illustrates ITS staff’s need and desire to have open, honest, and safe discussion pertaining to current events. CCI hopes to host these sessions on an ongoing basis.

The CCI has been successful in part because of the support of colleagues and senior leadership. The undertaking has been a joint effort, one that both Debra and Samantha agree would not be possible without the collaboration and backing of a number of people on task force and within ITS. Members of the action team were instrumental throughout the inception of the task force and the creation of its concept and mission, through having the difficult discussions necessary to carry out their mission. Through their conversations they were able to better understand what would make people feel valued and what could help boost morale and transparency. Managers and supervisors of staff have fully supported the initiative, and have begun incorporating D&I questions into their one-on-one meetings to better measure employee engagement. Ultimately, the goal is for this to become a standard managerial practice. Most importantly, members of the CCI Steering Committee were always there to provide feedback, suggestions and encouragement.

To learn more and to become an ally in the CCI’s mission, contact its.cci@yale.edu.