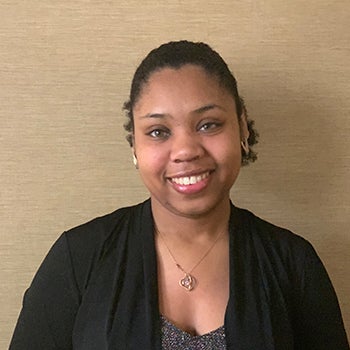 In 2008, Chevelle Irvin’s Platt Technical High School culinary teacher took her class to Hospitality’s offices at 246 Church Street, where her class filled out applications as casual banquet trainers for Catering. Out of the 20 applicants that day, only two remain at Yale. One of them is Chevelle.

Hospitality’s Banquet Server program required a rigorous four-year commitment and 980 hours of work. Upon completion, Chevelle used her paycheck to treat herself to a pair of shoes as a reward. She loves shoes.

Chevelle’s first official catering job was back-of-the-house prep, mainly garde manger. After a year, she left Catering to work the hot line at Pierson College. It wasn’t her thing, just “too slow.” Chevelle enjoyed being on her feet and keeping busy. Once Pierson closed for the summer, she was transferred for the season to Catering. Chevelle worked with the delivery drivers until a job opened at Silliman College as a general services assistant (GSA). In concert, she taught four classes of Zumba a week at a local Y and gyms in Meriden and Wallingford, getting into the best shape of her life.

Tired of the demands GSA work made on her physically and on her schedule, Chevelle left her position to return to Catering making deliveries, while also creating event set-ups. Transforming a blank space and making it look beautiful was satisfying work.

A stint at the Commons’ salad bar until it closed for renovations was followed by a position at Branford Saybrook preparing continental breakfast, with Zumba instruction in-between. Eventually, Chevelle passed the cook’s helper test and undertook breakfast duty at Silliman. Thanks to a connection with a former manager there, Chevelle merged her day and night jobs, teaching Zumba to Yale undergrads.

Just as she was settling into a comfortable routine, Adam Millman, now director of Residential Dining, approached Chevelle with a request to come back to Catering, which was shorthanded. Chevelle agreed to a one-month contract, as she wanted to return to Silliman through commencement and have an opportunity to say goodbye to the students, with whom she had formed close bonds.

Today, Chevelle is a banquet captain for Catering. She calls it an “elusive position, a little bit of everything.” Essentially, she plans, prepares, and executes an event to ensure that clients have a positive and successful experience, anticipating needs, and avoiding pratfalls. Yet Chevelle also sees her role as caretaker. She believes that if her team feels supported, it frees them up to take better care of their guests.

Chevelle works anywhere from 40-50 events a month, from large-scale parties to intimate dinners for ten. Her favorite celebrations, Founder’s Day and Staff Appreciation Day, provide opportunities to surprise her coworkers with something new. Ditto her enjoyment for student events. Chevelle believes they are equally appreciative of Catering’s efforts. From First-Year Holiday to a Halloween Party on Cross Campus, which featured ghoulish treats and “blood” juice shots, there’s always an opportunity to delight. She’s looking forward to February’s upcoming Sophomore Brunch, which last year showcased a pancake robot, a fun gimmick that wowed everyone.

Chevelle’s busy schedule leaves less time for Zumba classes. Her enjoyment of music and movement motivates her to attend a local salsa social every Wednesday night. A good life is all about balance, and Chevelle has found it, tailoring her schedule so that once a week she can get out there and dance!