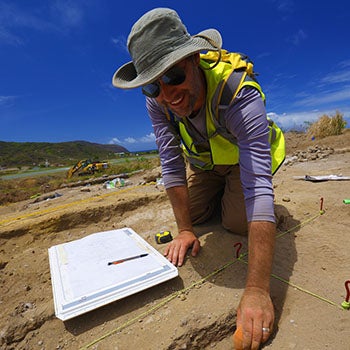 In the spring of 2021, Eric Stegmaier, senior conservation assistant, Yale Center for British Art, had the chance to use his archeological illustration skills at a dig for the St. Eustatius Center for Archaeological Research (SECAR) on the Caribbean Island of Sint Eustatius, where the remains of enslaved individuals were found at the site of the 18th-century Golden Rock Plantation. Based on earlier work he had done after graduating from the University of Hartford with an illustration degree, Eric was asked to join the team in Sint Eustatius. Considering his full-time position at Yale, he wondered how he could make this happen. Eric found the answer in the university’s Leave of Absence policy, which in his case was a personal leave—an unpaid, continuous voluntary leave from university employment initiated at the request of the individual staff member. Requests for personal leaves are reviewed on a case-by-case-basis and granted at the discretion of the supervisor and Human Resources. Find more information on the Sint Eustatius site in this AP News article.

How did your leave of absence come about?
I’ve been employed at Yale for 13 years and never realized that a personal leave of absence was an option for C+T staff like me until the opportunity came along to join the dig. The first people I contacted were my supervisor and my division manager. They were very supportive and encouraged me to go for it. They got in touch with our HR generalist and that got the ball rolling. I decided to add PTO to the month-long approved leave because I had built up a lot of vacation time due to COVID. So, April 20, 2021, was the first day of my PTO, which came first, and then whatever time was left was supplemented by the leave. I left for Sint Eustatius on April 20, and I returned on June 15, which was a week before everybody else because I wanted to be home in time for Father’s Day.

My job at Yale is pretty fantastic. In addition to my administrative responsibilities, I shoot X-rays of paintings, objects, and artifacts, not just for the Center, but also for the Art Gallery, and occasionally, the Peabody Museum. While considering the leave of absence, I was worried that I might not be able to reconcile my Yale job and the archeological work. But in talking with the Center’s deputy director and chief conservator Mark Aronson, and my supervisor, senior conservator of paintings Jessica David, and even the Center’s director, Courtney J. Martin, I learned about the rich British history of Sint Eustatius. I realized that while I was doing my archeological work, I might encounter potential research interests of benefit to the Center. The director of the excavation, Dr. Ruud Stelten, has offered to give a talk at Yale.

Why did you get invited to participate in the archeological dig?
I’ve been an archaeological illustration specialist for almost 20 years, and so in this capacity, I had reached out to quite a few different archeological groups, knowing that COVID had shut down many projects. One of the responses I received was from Dr. Stelten who runs The Shipwreck Survey, an underwater archaeological field school, out of Sint Eustatius. In 2020, Dr. Stelten and the Sint Eustatius Center for Archeological Research (SECAR) were commissioned by the Government of Sint Eustatus to conduct a survey of an area on the grounds of the airport that they were seeking to develop. Based on prior excavations in the vicinity, there was a high likelihood that this area might be of significant historical importance. Their assumptions were correct, as the survey confirmed the presence of a cemetery. I had done a few archeological illustrations for Dr. Stelten before, so he was aware of my work. He emphasized that he wanted the on-site documentary practices to be as comprehensive as possible, given the importance of the site. This would involve not only photographing everything we found, but also illustrating everything to scale. Many people ask, why not just photograph everything? We did. But I can accomplish in one illustration what might sometimes take three, four or five photographs. If you’re photographing a skeleton, you might not be able to see a tiny shroud pin, whereas I can draw the skeleton and then add that element and others in—one of many, many different reasons why illustration was important here.

Who were you working with?
I was a member of an assembled team that included students and specialists from Australia, Italy, the Netherlands, England, the United States, and Finland. In addition to recovering the remains, the research team wanted to do a comprehensive scientific analysis afterwards, which involves DNA and isotope work, to find out exactly where in Africa some of these people came from, and to potentially find living ancestors on the island. Another goal was to see what the diets and maybe some of the illnesses of these individuals may have been. We even had a forensic facial reconstruction artist with us on-site.

Since the excavation happened during COVID, there were precautions in place?
We all stayed at the Caribbean Netherlands Science Institute, and because we were all coming in from different countries and we were all at different levels of vaccination, it was a bit of a challenge for everyone involved. The island only had 1 case of COVID by the time we arrived, and no fatalities. Prior to departing for the island, we had to provide negative PCR and rapid antigen tests to both the Ministry of Health on St. Maarten, where our connecting charter flight was to depart, as well as the Health Department on St. Eustatius. Once we were all there, we were quarantined for 10 days, and only allowed to leave the Institute to go to the airport, do the work, and head back. The vehicle that we drove had to be the same vehicle every day, with the same group of people in it, so we just hoped that nobody had flown in with COVID, which luckily did not happen. On the 10th day, we were all tested again and, with all negative results, were removed from quarantine.

One of the rules I had set for myself was that I was never going to do one of these digs and not have it be an educational experience for my daughter. I was able to Zoom into her kindergarten classroom while I was there after talking with her teacher beforehand. And, oh, my God, the kindergartners just ate it up. I had their attention for a full 25 minutes. It was great. 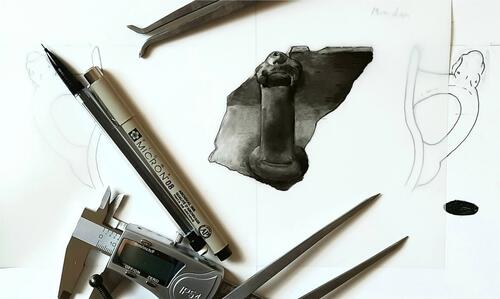 This is a rendering of a jug handle found in the prehistoric section (7th-9th century CE) of the excavation. It is a piece of ceramic from the late Saladoid era.

What did your work at the site consist of?
For the first week or week and a half, I helped excavate because nothing had been dug up yet so there wasn’t anything for me to draw, except for a few artifacts here and there. Then the archeologists started coming across remains and exposing those. Most of the burials had three phases of excavation—the team would dig into a grave and if they came across the outline of a coffin, I would draw that to scale. Then they would continue digging and expose where the coffin lid might have collapsed onto the set of remains and I would draw that before they removed all the wood. Once they removed the wood, I would draw the exposed skeleton as well. Not all the deceased individuals were buried in coffins, but many were. My job was to draw each burial with any associated grave goods that were found, artifacts, coffin furniture, iron nails, and copper pins, which might indicate if the person had been buried in a shroud. Basically, anything that was related to the burial, I was responsible for drawing.

There were a couple of different phases to the work that I did. I would do field drawings, which were on graph paper all done to scale. They’d get dirty and torn up at the site so I would complete the basic measurements and the basic drawing of everything. Then I would go back to my room at the Institute and lay down a translucent piece of Mylar and basically trace the field drawings to get all the shading and the texture, essentially creating publication-ready drawings.

Depending on the size of an individual’s remains, it would probably take an hour and a half to draw in the field, and then probably another three hours to render back at the Institute. Then I would also have to scan and digitize the drawings and clean them up in Photoshop, so that’s probably another hour each, so I’d say five to six hours for each burial. In the end, there were 69 burials that equate to about 90 field drawings because some of them were multiphase. I was able to finish about 40 of these on site, which means I’m about halfway there. In my spare time, I’ll be working on these probably through mid-fall.

Did you learn something new about yourself?
One thing I learned about myself is that no matter how stressful a work situation can be or how foreign a work situation might appear, I will always find a way to do excellent work. I gained the confidence to know that I will always be able to do my work efficiently and to a high level of quality. It’s something I’ve always known about myself, but my confidence in that has wavered over recent years, especially during COVID.

How did the leave affect your life and your work?
The LOA policy allowed me to fully experience something that I am truly passionate about. Don’t get me wrong—I love my job at Yale but like most people I have other interests as well. I was able to learn more about myself and my abilities, which carried over into my job at Yale. Almost everyone I know says that I returned home a different person. Honestly, I feel like a different person. Not only was my confidence affected, but the very nature of the project moved me profoundly.

What would you say were some highlights of the experience?
Most of my work prior to this has been in the near and Middle East—Israel, Jordan, Egypt. This was an altogether new experience. And that is what I like about doing archeological drawing—I could work on a site in Israel one day and then go to the Caribbean the next. I always learn something new, so there’s always these moments, these lucid moments, where I’ll be standing alone for a couple of minutes and I’ll think to myself, ‘My God, how did I get here? How did this even happen?’ At Sint Eustatius, I would work through lunch a lot because in order for the archeologists to continue digging, I would have to finish my drawings. There were times where I was left alone at the site with three or four sets of remains. And it would just be indescribable, not haunting in any way, certainly, but just this profound feeling of gratitude for being able to have this experience. The historical weight of what we were doing really sunk in as well.

One last thing?
Yes, I want to thank my Yale Center for British Art colleagues—supervisor, Senior Conservator of Paintings Jessica David, Deputy Director and Chief Conservator Mark Aronson, and Paul Mellon Director Courtney J. Martin for their support, as well as our HR Generalist Courtney McCarthy. Additionally, I’d like to thank Dr. Ruud Stelten, Alex Hinton, the board of SECAR, and the Government and people of Sint Eustatius for putting their faith in my abilities and allowing me the opportunity to take part in such a life-changing experience. I hope that my work has met the gravity of this project and that, in some small way, I helped honor the individuals that we excavated.