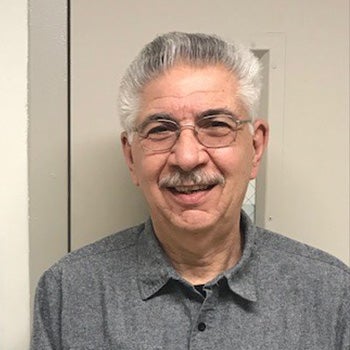 Gary D’Amora emanates a calm and steady presence as he moves through his busy workday. Gary combines a serene demeanor with a strong work ethic, a sense of fairness, and a quiet sense of humor. As facilities manager of the electrical and refrigeration shops on the medical campus, Gary manages a team of 12 who together maintain over 30 buildings. He enjoys the challenges of managing complex systems and welcomes a few jokes now and then.

Born and raised in New Haven, Connecticut, Gary attended Eli Whitney Technical High School, where he studied auto mechanics. As a teenager Gary worked in a local grocery store until he joined the U.S. Naval Reserves. After being honorably discharged he began an electrical apprenticeship with his uncle at A.R.M. Electric. While working as a full-time electrician, he opened the New Haven Embassy Food Shop with his wife. They owned and operated this grocery store for over ten years. In the early 1990s, while running his own electrical business, Gary applied to Yale and was hired as an electrician. Now 29 years later, he continues to enjoy his job, working closely with his team and keeping all those buildings running.

What was your first job at Yale?
I was a Local 35 electrician on the medical campus. I applied for the job because the economy took a downturn, and my own electrical business was slow. I planned to work an off-shift and keep my business going. As luck would have it, the job was on the first shift. So I closed my business and didn’t look back. I became a manager in 2005, and I think being a member of the union, I understand both sides’ views. Having that understanding, I can get a consensus when needed, and if nothing else, I understand where everyone is coming from.

Day to day responsibilities
I operate the refrigeration and electrical shops at the Yale School of Medicine (YSM). I manage three refrigeration mechanics, seven electricians, and two electrical apprentices. Our refrigeration mechanics perform preventative maintenance and upkeep on environmental chambers, large air dryers, minus-80-degree freezers, and ice machines. Our electricians maintain electrical systems throughout the YSM campus. We also provide alternate power in case of an outage with eight large generators that we maintain and test monthly. Our team provides new installations for customers and supports contractors with electrical shutdowns and circuitry tracking.

Favorite Yale memory?
When I first started working here, two of my colleagues known for their practical jokes played one on me. On one very cold afternoon, I went outside to my truck and noticed it had a half-inch thick layer of ice on it. Not thinking anything was unusual, I started it up and began scraping. I then realized all the other vehicles were leaving the lot and had no ice on them. As I’m driving to Meriden peeking through a small hole, I was able to scrape off the front windshield, I’m laughing. It was pretty funny. To this day, one of my colleagues whom I now manage won’t admit to it. The other colleague has since retired—the ironies of life.

What advice would you give someone coming to Yale as a new employee?
They need to understand that Yale is unique. It is not like working at a business or a corporation. Yale has its own culture, and there are specific ways of doing things. It’s a great place to work. I would say to someone coming in, go with the flow, get a feel for how Yale is run and managed, and work within that. You’ll be fine. I’ve been here for 29 years and still enjoy coming in every day.

What are changes have you seen at Yale over the years?
When I started here, Facilities didn’t have a maintenance management program. Not long after, they began with a program called EMPAC and were looking for volunteers to build a database of all the parts the different shops used. I volunteered and entered all the data for our electrical shop. From that year on, they were able to start charging things out electronically and tracking maintenance records and inventory; before that, everything was done with paper. EMPAC later was replaced by FAMIS, the system we now use for maintenance work orders and so much more.

What is the biggest challenge working here?
Yale keeps growing and acquiring more space and buildings, and that’s great. The workload has increased, but the workforce hasn’t. For instance, we now maintain 350 George Street, a large building, with the same number of resources.

Favorite hobbies.
I enjoy working around my house in the warmer weather. My wife Gail and I have been married for 52 years! We have three grown children, four grandsons and one great-grandson.

What was your first car, and what happened to it?
My first car was a red 1956 Chevrolet Bel-air. I used to love tinkering with cars and racing them. I ran that a little too much and blew the engine after only one year. Cars have become so complex with computers, etc., that I don’t enjoy working on mine anymore. I used to perform most repairs on my vehicles.