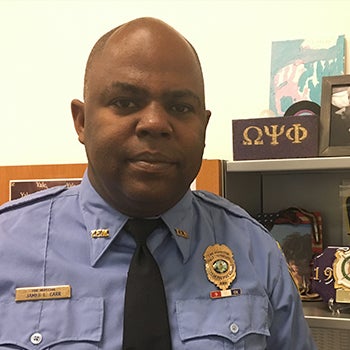 James Carr possesses a calm inner strength, handling tough situations with grace and fortitude. A union steward, he believes strongly in championing people’s rights. He is a Fire Inspector and has been at Yale for almost 16 years. James is the son of a U.S. Airforce Sergeant who was born in Santa Barbara, California. The Carr family moved several times during his childhood, including the Philippines and Colorado, before finally settling in New Haven, CT.

Education is extremely important to James, who has a B.S. in Human Services from Springfield College and an M.S. in Fire Science from the University of New Haven. Today, he continues his education with hazmat training and other course refreshers to stay certified in his field. In addition, he tutors students at Hillhouse High School.

For several years, James worked as a packaging designer at Pregis Corporation/Honeycomb in North Haven, CT. By chance, he heard that Yale was hiring and got a casual position as a dishwasher in Trumbull College. Not long after, he was brought on full-time and worked in the Calhoun College Dining Hall, now named Grace Hopper. A few years later, he became a custodian in The Anlyan Center. Around that time, he grew active in the Local 35 Union, eventually becoming a steward.

James worked on a team that developed the Custodial Team Leader (CTL) program and became one of the first CTL’s in the Science area and then moved on to West Campus. At that same time, he took and passed the Law School Admission Test (LSATs). But just as he received his first law school acceptance letter, he had a change of heart. “I like working here and had over a decade of service, but I wanted to further my career,” said James.

So James switched his educational focus and sought out fire training and specific state certifications with an eye toward becoming a Yale Fire Inspector. As part of this training, he also spent time as a volunteer fireman with the East Haven Fire Department. Now as a fire inspector for almost five years, James keeps busy performing building inspections and ensuring new buildings are properly equipped for life safety and meet CT State fire safety codes.

Today, James and his wife Tishshanna, live in Branford with their Yorkie Diesel. When James isn’t working, studying, or volunteering, he attends the Faith Temple Revival Church in Hamden.

What was your very first job?
One summer, when I was 14, I worked as a day camp counselor for the Lincoln Bassett Elementary School Leadership Program. I oversaw about eight kids from the third and fourth grades who needed extra credit to pass. The program involved camping and studying. It was my first time as a mentor and tutor—something I still do today.

What was the best advice you received and from whom?
The best advice I ever got was from my dad, John H. Carr, Sr. “Obstacles will arise, but hurl over them with courage.”

What are some of your hobbies?
I do a lot of community service through my fraternity Omega Psi Phi and the Local 35 Union, which includes tutoring, book bag drives, blood pressure testing, voter registration, and local election volunteering. It’s important for me to help others fight for their rights.

What advice would you give someone wanting to work at Yale or move up the ladder here?
Some days it will be tough, but hold your head up high. Stay open to learning new things and earn an education in a field you are interested in pursuing. Education is not a four-year course; it is an ongoing life experience. Also, and just as important, take care of your physical and mental health.

Do you have a favorite memory of your years working at Yale?
Around 2005 or 2006, I was working on the medical campus and had some tough supervisors. I was mistakenly blamed for something (and later exonerated). It was at that juncture that I became a union steward and understood the importance of protecting people’s rights.

What are you most proud of?
My daughter, Alyssa, and all she has accomplished—graduating from college, getting a degree, and working in a field she loves.