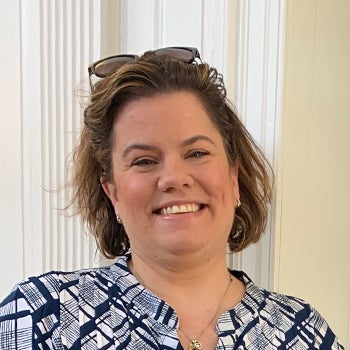 Kory’s first day at Hospitality was an auspicious one, her birthday, on September 13, 2015. She came to Yale with an extensive background in facilities management, and restaurant and hospitality experience, all combined with a keen business sense.

Kory’s education is rooted in business, with a B.A. in Management from Babson College, and an MBA in Human Resources and Marketing from Southern Connecticut State. Before coming to Yale, she worked for a facilities maintenance company out of Branford, managing 23 rest area locations on the Merritt Parkway, I-395, and I-95. Her venture into the hospitality world with her former partner was ownership of a 35-seat restaurant in Branford that focused on New American Continental cuisine. To meet Kory is to know her outgoing personality and easy manner, so it’s unsurprising that her favorite part of restaurant work was front of the house, taking care of guests.

Kory claims that in her four and half years with Hospitality she has changed locations more than any other manager. She began as a casual bartender and pantry worker for Catering when Robert Sullivan, now senior director of Auxiliary Operations, was at the old school of management. As a new parent, casual employment allowed Kory flexibility more family time. She then trained as a manager at Jonathan Edwards College, followed by a stint at Davenport, before a permanent managerial position became available at Timothy Dwight College. Kory remained at T.D. for two years before being promoted to general manager at Jonathan Edwards. Shortly after that, an opportunity arose unexpectedly at Pierson, which is where Kory settled into her present job as general manager at the College.

Asked what she enjoys most about her current role at Pierson, for Kory, it’s the caretaking aspect of the job, for students and her staff, the collaboration, and the positivity her team brings to their work. There’s also the wonderful food created. Among Kory’s many favorites, the BBQ Salmon and Pierson’s chicken tenders. Kory gave honorable mention to Jeff Arico’s Finnish pancakes (“The Best”) served weekly at Pierson’s Brunch for Dinner Wednesdays.

A native of Milford, Kory is devoted to her family, a close-knit clan. Her daughter Roslyn is Kory’s pride and joy and an avid young cook. Roslyn and Kory volunteer together at a local community center and pantry in Branford, cooking lunch twice a month and delivering meals. “Roslyn is all in to support the community, especially if it centers around food.” When taking a break from her hectic schedule, gardening is a favorite and relaxing pastime. A recent move to a house with plentiful outdoor space and sunlight will allow Kory to expand her skills in that arena, which she hopes will one day surpass and perhaps even best Berkeley College’s Dave Brooks’ enviable garden.