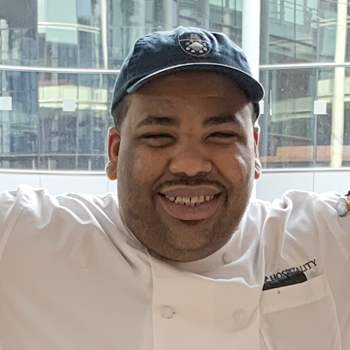 Lamar Bowers, third cook at the School of Management (SOM), has been at Yale for the better part of 15 years. His career began at the age of 16 when he took a summer job with Yale Catering as a member of the wait staff. Throughout the remainder of his high school years, Lamar bounced around the Yale campus as a casual at Berkeley, picking up hours here and there, before permanently landing, post-graduation, in the dishroom and pantry at Stiles and Morse. A yearlong sabbatical from Hospitality followed in Custodial Services while he took classes in Electrical Engineering at Gateway. By his own admission, Lamar didn’t know what he wanted to do. He landed at Stiles and Morse once again, working with Justin Meyers at the pizza station over the next five years. He enjoyed the work, but was unsure about the direction of his professional path.

For Lamar, inspiration struck at Hopper College as a cook’s helper for Michael Collins and Joe Shields. Under their tutelage, Lamar got the spark he needed. His daily routine wasn’t a grind, but rather, he felt challenged and inspired by the work. It was through the late Chris Carbone that Lamar was introduced to Dave Kuzma for a position at SOM. According to Lamar, Chef Kuzma’s kitchen “changed my life and my outlook. I grew in my career. Dave is one of the best chefs that I know, and he took the training wheels off.”

Today, Lamar has wholeheartedly embraced a culinary career. With Chef Kuzma’s encouragement, he recently entered and won a culinary competition at Brooklyn Technical College for his execution of a home-style recipe in under one hour, crafting a deconstructed pot pie. He’s currently preparing for the NACUFS regionals in late March.

Lamar’s primary motivation is the feedback he receives from guests.  For him, it’s gratifying to receive even the smallest compliment on the food he prepares and to know that it’s appreciated. Although Lamar has passed both his third and second cook’s exams, for now, he prefers to remain in his current position under the continued supervision of Kuzma, Cyril Ortigosa, and Humberto Espinal. Lamar believes the dishes that emerge from their kitchen receive the highest care with maximum creativity, and he has more to learn. Lamar also values the camaraderie of his job. His favorite event is Friendsgiving, a pre-holiday dinner featuring a family-style meal for 300 that requires up to three days of collaborative advance prep.

In addition to his colleagues, Lamar’s greatest supporters are his wife, who recently received her master’s degree in Human Services and is currently seeking a position at Yale, his two sisters, one a chef at Davenport, the other a painter’s apprentice at the University, and his mom, a general building manager at Silliman College.