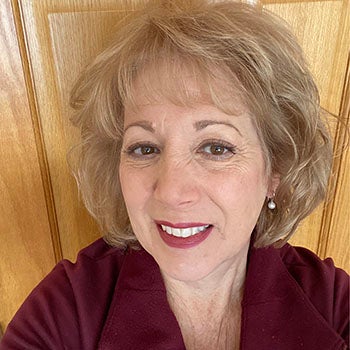 Lisa Palumbo, part of the Yale community her entire life, is retiring in December after a 30-year career at the University. She grew up in the East Rock neighborhood a few blocks from campus and her father, Frank Manicone, worked in Yale Facilities’ Physical Plant for over 40 years. Lisa is a coordinator in IT Business Operations.

Lisa graduated from the former St. Mary’s High School in New Haven, Connecticut, and received a B.S. in accounting from Quinnipiac University. For the next several years, she worked for Nationwide Mutual Insurance Company in Hamden’s accounting department. She took time off to raise her two boys, but after about a decade, Lisa decided to jump back into the workforce. She started off by accepting a casual part-time job in Yale Dining Services (now Hospitality).

Several months later, Lisa was hired permanently as a financial assistant in the IT Telecommunications Business Office. Next came a promotion to assistant business manager, supervising a staff of three who handled accounts payable and purchasing for the department. It was a different era; journal entries were typed using carbon copy paper and the monthly general ledger reports were delivered on printed on paper. The team reviewed and balanced accounts, page by page, among other responsibilities.

As the years passed, technology improved, and after several reorganizations, Lisa landed in the IT Business Operations department. One constant task back then was to review numerous telephone and network invoices—now consolidated down to a mere 25. Today, that monthly review also includes cellular bills. Lisa likens herself to a “traffic cop” when invoices arrive; she directs where they go or gets them reworked if they are incorrect. Every IT transaction passes through her, including requisitions, expense reports, and invoices. On average, she reviews, approves, or submits about 2,000 transactions yearly.

We met with Lisa to discuss her impending retirement and what it was like working before everyone used a computer.

When I was going to college, I worked part-time at the New Haven Register. I typed classified ads using a typewriter. It was the era just before computers. If you made a mistake, you had to fix it using white correction fluid or erase tape. When I look back and compare what we did then and what we are able to accomplish now, it’s incredible. Also, back then, there was no spellcheck!

What are you working on right now?

I’ll retire in December, and currently, I only work four days a week. We are implementing a new ServiceNow form for on-and offboarding IT consultants. I’ve been involved in the planning meetings to get this project moving. The volume of consultants has increased since the beginning of the pandemic. And, of course, I continue with my regular daily responsibilities. It’s been an exceptionally busy time.

What is your favorite childhood memory?

I grew up on Whitney Avenue, just blocks from the campus. I rode the Yale Shuttle as a young girl, and many people in our immediate neighborhood worked or taught at Yale. So, it was being around the people of Yale that I remember most. My dad worked at Yale, so we benefited from the Yale child scholarship/tuition benefit when I went to college. My dad was very proud the day I got hired by Yale and eventually promoted into a management position.

I would say the few strikes I experienced over my career were memorable and some of the unusual aspects of my job. The work still must get done during a strike. If we didn’t pay the phone bills, they’d cut off service, and we have many clinical satellite offices that rely on phone and network service and, years ago, pagers.

What will you miss most about Yale?

The people that I’ve helped and supported over the years. We used to have a mantra years ago “serving the Yale community for the greater good.” We weren’t just supporting the IT staff in their daily work, but also the Yale doctors, medical staff, and other researchers so they could do their work to help people, find cures, and more. It is that sense of purpose that I will miss most.

What are you planning on doing in retirement?

I’d like to do more gardening, baking, and cooking. My husband and I are researching spending winters, possibly in Florida or somewhere warm.

Any parting words of advice for colleagues or new people considering a career in information technology or finance?

If you enjoy helping people, Yale IT is a good place for you. Yale could not function without the support of IT and all the hardware and software it stands up and manages. IT technology and the IT staff’s support has been critical during the COVID-19 pandemic keeping us all working, some from home, and keeping the university going. Yale IT truly assists in the greater good of Yale, and the university as a whole can’t survive without IT.