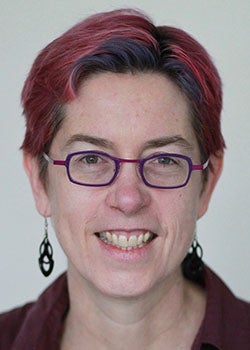 Lisa Sawin, senior director, IT Shared Services, joined Yale in 2013, as a manager in ITS. The path that led her here is unique and wide-ranging. The takeaway? “I want people to see there are a lot of different ways to get where you want to go. I am a senior leader in IT, and seven years ago I hadn’t managed anyone. It has been a fast, sometimes crazy journey. I’ve seen so many people take winding turns to get where they end up. Sometimes you think you know what you want, but you learn things along the way and grow and change. You never know what the future holds for you.”

What did you think you were going to be when you grew up?

As a young child, I wanted to be a veterinarian. By the time I got to college, I wanted to be a mathematician, but after four years in a Ph.D. program, I decided it wasn’t for me, so I dropped out and enrolled in community college, where I received an associate degree in furniture making. After starting a family, I decided to become a labor & delivery doula, supporting women and families through the significant moment of having a baby. When my youngest was in first grade, I took a class in computer programming and I’ve been in information technology ever since. That was in 2001, so we can do the math, but I was in my late 30s when I still hadn’t figured out what I wanted to be when I grew up.

I started programming to help support my growing family. My husband was junior faculty at the time, so I wanted to do something lucrative that allowed me to use what I was good at. I really like the logic in math and using my hands, and information technology is building something with logic. At first, I’d code 10 hours a week, then 15, then 20, then 40, and gradually, over the course of 10 years, I became increasingly skilled and took on more leadership roles. My first full-time professional job was at iFactory, eight and a half years ago. I left iFactory when I was offered an incredible opportunity to build something new at Yale. I started with a couple of people reporting to me on the web services side and built up a team providing user experience services.

What is the biggest challenge today of working in IT?

All the moving pieces—things we do are complex, requiring coordination within your own team, other teams, the community, customers, and sometimes with external professionals and vendors. Getting systems in place that help everyone work effectively together and aligned towards the same goal is tricky. It requires people skills, technical skills, empathy, commitment, and ‘stick-to-it-ness.’ I think dealing with the multiplicity of perspectives and streams that must feed into any one thing we do here in IT is the hardest part.

What advice would you give to any person who’s interested in starting a career in IT?

Confidence is key. One reason I decided not to pursue math is that when I was younger, I assumed that the way people looked was the way they felt—and they looked way more confident than I felt! I assumed I didn’t belong because I couldn’t see my path to the level of confidence that they had in their work. I learned that you have to embody who you want to be. Wherever you are in your career, if you think about the next step that you’re looking towards, or even the step after that, think about what you can do to take on that role, that responsibility, that persona—how can you embody that today? That is going to lift you to achieve your career goals.

My hobbies are very important to me. I’m into fermenting. I make my own kombucha, mead, sourdough bread, sauerkraut, preserved lemons, and miso. I just attended a two-day fermentation festival in Wisconsin, where I perfected my sourdough loaf.

My first experience with Yale started when Will was a kid. He excelled in math at an early age. He began meeting with a renowned Yale math professor, Serge Lang, in third grade. He then started taking Yale math courses in fifth grade. Will graduated from both high school and Yale at the age of 17. I used to sit in the café of the old SOM building with my laptop, coding while I waited for Will to get out of class across the street.

My last name is made up. When we got married, we wanted to have the same last name, but we wanted to do something that felt more feminist and forward-thinking. Sawin is Celtic for Halloween, which is when we first started dating.