Dedicated to giving back 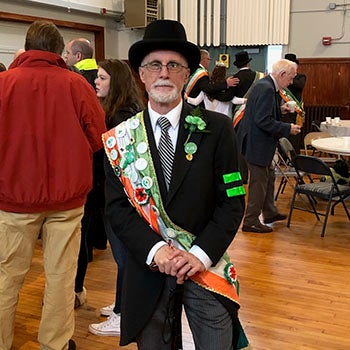 Marty Platt enjoys many things, including playing hockey, working at Yale, and volunteering for the Greater New Haven St. Patrick’s Day Parade. A cost analyst for Custodial Services and Recycling, Marty has been at Yale for 25 years, working for Facilities the entire time. Given his background, it is no surprise he enjoys volunteering.

Born in Canada, Marty’s family moved to Maine when he was 16. A bright student, he finished high school one year early. Not long after, the family moved to Connecticut, where he played hockey for West Haven High School as an enrolled senior and earned a second diploma. He then spent three years in the U.S. Army as a sergeant completing tours in Germany and Vietnam. Taking advantage of G.I. Bill benefits, he subsequently earned a B.S. in Accounting from the University of New Haven.

In 2006, he joined the Greater New Haven St. Patrick’s Day Parade Committee. It was a former colleague who got him interested. Fifteen years later, he still volunteers with them, works with two other local groups, and hopes in retirement to give back more, especially by helping veterans.

The St. Patrick’s Day Parade of Greater New Haven is the largest single-day spectator event in Connecticut and the nation’s sixth oldest parade. The parade is kept alive by committee members, like Marty, who organize and fundraise, ensuring this family-friendly and free event endures for many years to come.

Marty has been involved in several aspects of the parade over the years, helping set up parade groups. “I’m on the street assigned to specific groups as they step off and begin their route. The event is televised, so we set up in sequence about 300 groups each year. If something goes awry or a group or dignitary has canceled, we radio the announcers, so they know who is coming down the street,” said Marty.

Giving back to the community is important to Marty—who recruited his best friend to help with the parade. “I love the camaraderie of this group. You don’t have to be Irish to volunteer,” said Marty. Being part of the parade committee spurred him to do more, including volunteering yearly at the West Haven V.A. Medical Center working with blind veterans. He also helps out with the Yale’s yearly Multicultural Block Party.

“Volunteering gives you insight into how other things work. It is good to grow and continue learning. You have one shot at life, enjoy it, but also give back. These local organizations need help to survive ‑‑ that help is us!” said Marty.