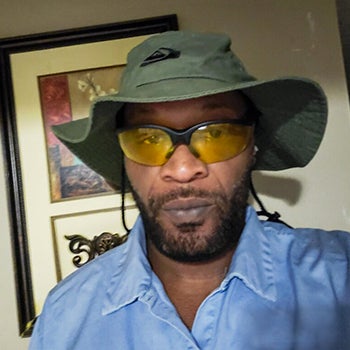 If you’ve ever walked past the Peabody Museum or behind Kroon Hall and admired the well-manicured lawns and gardens, Michael Sullivan and his team create and maintain all that beauty. A part of Facilities Services and Grounds for twelve years and a Yale gardener for the past twelve years, Michael started at Yale as a dishwasher and cook’s helper. While working in the Commons Dining Hall, he learned about a program where you could apprentice as a ground’s keeper. As a lover of nature and the outdoors, that was a perfect fit for him. Today, he and his team work the Science Hill area from 221 Whitney Avenue up Prospect Street. Michael takes great pride in his work and enjoys developing gardens and planting flowers that make people smile.

Michael grew up as part of a large family in New Haven and after graduating from Hillhouse High School, started college taking graphic design courses. But soon after, his mother became ill, so he began working fulltime and helped take care of her. During his apprenticeship at Yale, he fell in love with flowers, ornamental grasses, and gardens. He’s even studied edible plants and hopes to finally go back and finish his degree, possibly majoring in art or botany.

Michael talked to us via Zoom about his team, staying positive, and dealing with the weather.

What was your very first job ever?
In the late 1970s, I was a paperboy. My route was mostly downtown New Haven. Ironically, I’d often ride my bike through the Yale Campus. I did that for a few years. Then when I was about twelve, I became a summer camp counselor.

What is your favorite childhood memory?
Growing up, I had a dog named Napoléon. He was a small schnauzer mix. He followed me everywhere. I loved that dog. I was pretty upset when he died.

Best advice you ever received and from whom?
My parents always gave me great advice. Most often it came from the Bible. The one verse that I value the most is “do unto others as you will have them do unto you.” That is what I try to do always. It works, even when it doesn’t feel good.

What advice would you give someone who wants to work at Yale or move up the ladder here?
Don’t give up; be persistent if you want something. Be patient and keep an eye out for opportunities. If you keep doing a great job, you will get noticed and rewarded. And stay positive it helps you get through a lot and everyone wants to be around positive people.

Favorite Yale memory?
Some years back, we were putting in a new urban garden in front of Sage Hall. Someone came by to take a photo of the team working on it. One of our guys was out that day and upset he wasn’t in the picture. Walt Debboli was our supervisor at the time. He went out of his way to get that group shot retaken. It was nice to see a manager care enough about his team to do something like that. He made sure everyone was included and praised. It meant a lot to all of us.

What do you love about your job?
I enjoy working with a diverse group of people. Everyone has a different personality, and it makes things fun and interesting at the same time. I like that I’m surrounded by diversity on the job and here at Yale. I find it very positive. I never harbor negativity, what’s the sense. I try to see the positive in everything. Maybe that is why I like gardening, it makes areas look so beautiful.

What is your biggest challenge at work?
The weather is always a challenge. It’s either too hot, too wet, or too cold. All these issues factor into when you are working in the outdoors.

Any favorite hobbies?
When my kids were little, I always enjoyed collecting comic books with them. Now, I have grandkids, and we enjoy doing that together too. It started as a hobby, but now I collect those that I feel will have value in the future. Currently, Superman comics are very valuable.

Favorite plants or flowers?
I love anything colorful like pansies, impatiens, or violas. I like to plant stuff that I know will make people smile, and that is usually anything that has a lot of color.

What was your first car and what happened to it?
When I was about 18, I bought a white 1993 Ford Escort wagon without telling my parents. Driving home from picking it up, the axle broke in the middle of the road. I literally had it for a few hours before it broke down. My parents didn’t get mad but said they hoped I had learned a lesson from that experience. I did, in that they were there to help me, especially through life’s bigger issues and decisions.

Once the world opens for regular business, what is the first thing you are going to do?
I’m going to pick up my kids and grandkids and go out together to dinner, shopping, or to a park. I’m going to stand outside and breathe in some fresh air.