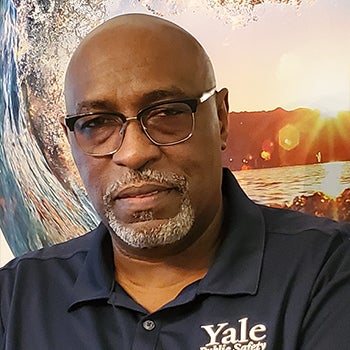 Reggie Chavis is always on the move. As a Yale Public Safety Security Manager, he offers instruction and encouragement with genuine warmth and sincerity. A hands-on manager, he likes to check-in with his staff, so you may see him making the rounds on campus in a car or on a bike.

Reggie, who has worked at Yale for 13 years, manages eight Field Training Officers. In his current role as Training Manager, he develops, tracks, and administers training for the department’s managers and officers; he also onboards new hires. Off duty, he is an elder at his church, New Beginnings Ministry, where he oversees the Men’s Ministry and is able to officiate weddings, preside over funerals, and minister to the sick.

Born and raised in Brooklyn & Queens, New York, he grew up in a bustling, multi-cultural neighborhood riding his bike, playing sports, and fishing. He had a ton of friends, many of whom he remains in contact with. After high school, and in keeping with family tradition, he enlisted in the U.S. Navy rising to the rank of Petty Officer Second Class. His first command was aboard the U.S.S. Albany CG10—a guided-missile cruiser, which was deployed in Gaeta, Italy.  Stationed in Gaeta for two years, he got his first apartment there and learned to cook—which he still enjoys today. After ten years of service, Reggie received an honorable discharge and other medals and accommodations.

Before coming to Yale, he worked for the Connecticut State Department of Correction, retiring after 20 years of service. He had no plans to start a new job, but a friend said Yale was hiring, so he applied for a part-time security officer job and was soon promoted to manager working the second shift.

A father and grandfather, Reggie enjoys time with friends and family and has found the pandemic “isolating” when you can’t hug those you care about or who may need comfort. He talked to us via Zoom about the importance of comradery and connections with each other, and how he has enjoyed spending time at home with his wife and grandkids.

When I was 17, I got a job working for Crown Cleaning Corporation. My dad was a manager there. They had a lot of big clients. I was a janitor and cleaned the Indian Embassy, and the Swiss Airlines Cargo hold. I did that for a year. It was hard work, but fun. At Swiss Air, I had to ride around on this big sweeping machine—that was hilarious, first vehicle I ever drove.

My mother was the oldest of 15 kids. I had a lot of aunts and uncles and first cousins, some were more like big brothers and sisters. My favorite was my Uncle Darrell. We spent a lot of time together. I was always over his house. He taught me Taekwondo. I was a brown belt, and we’d watch-martial art movies together. Those are some great memories. He was a Vietnam Veteran. Sadly, he died from exposure to Agent Orange.

Best advice you ever received and from whom?

Best advice was from Pastor Darren Ortiz. He said, “truly loving someone is when you consider them above yourself.” When you love someone, you don’t look for anything in return. I often take a step back with my wife and kids and try to consider what is best for them, not what I think is best or how I think they should do something.

Biggest work challenge(s) you or your department is facing?

Some years ago, when I had transitioned from an officer to a manager, the department underwent a change in two areas—leadership and function. The whole structure of the department was changed as officers were being reassigned to different shifts and postings. Each night, Richard Nucci and I spent a lot of time reassuring and encouraging the second shift officers as they transitioned into new assignments. It was difficult and rewarding at the same time. The second shift officers are great, and during that time became an efficient and effective team. Change is inevitable, and we are fortunate to have great leadership in Dwayne Lovello as we move into the next phases of growth in the department.

First lesson, food is fun and not my friend “stay away from the refrigerator!” (laughs). Seriously, I found that being home allows for easier access to food and as a result I put on a pandemic 15 lbs. It is now time to move into – delayed gratification mode to get into a healthier lifestyle. It is okay to postpone what brings us joy for a little while because that delay benefits all of us.

I love to cook, and I’m learning how to play the bass guitar. I’m an electronics junkie. I have Alexa controlling my homes lights, alarm, music, and Television almost the whole house and my car can be voice-activated. It’s great!

Some tips or advice you’d give people working in Yale Security?

I tell my peers and staff the same thing: always remember to be fair, and consistent in everything we do. I often impress upon the officers that we don’t know who we are dealing with maybe a student, staff, visitor, etc. So be consistent and always be there to assist.

If you weren’t working in Yale Security, what would be your dream job?

I would work as a clergyman full time. I’d also like to write a book. Since my time in the Navy, I’ve felt the ministry was my true calling.

Living in New York City (NYC) I didn’t need a car. I didn’t learn to drive until I was in the Navy. My father gave me a 1974, hunter-green, Mercury Cougar RX7. It had an 8-cylinder engine, and it was fast! I drove it from NYC to Mobile, Alabama, where my ship was docked. The first thing I did was replace the 8-track with a cassette player. Sadly, I got hit, and it was totaled.