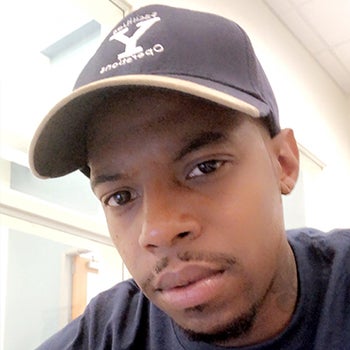 Rodney Williams has a knack for fixing things. As a young man, he liked to take games and computers apart to see how they worked. He now applies that curiosity and skill to his job as a Yale electrical apprentice.

Born and raised in New Haven, his family has close ties to Yale with several family members employed there. After graduating from Wilbur Cross High School, Rodney worked part-time with Yale Hospitality in catering. He was hired full-time in 2006 as a dining hall pantry worker. Wanting to further his career, and while still working, he attended Lincoln Tech and received his electrician’s certificate. He soon realized the path to becoming an electrician was uncertain, and he enjoyed working at Yale and the camaraderie, security, and benefits it provided.

Biding his time and waiting for an opportunity, a custodial position opened up at Yale. He bid for and got it. Rodney made a name for himself throughout his career, and in each job interview, managers and union leadership remembered him. Bolstered by his manager, who constantly encouraged him, he was referred to the new electrical apprentice program. Currently, he is three years into the 5-year program. “It’s going by so fast. It’s like an adventure,” says Rodney. “They have us working in places at Yale most people have never seen. We are repairing old machines and shadowing the senior electricians. They enjoy teaching us and appreciate our excitement and ambition.”

Rodney, who lives in Meriden with his daughter and girlfriend, talked to us via Facetime about his life and career.

What was your very first job?
My very first job was as a summer camp counselor working with pre-school kids. But the job I have the best memories of is when I worked in Yale Catering one summer when I was still in high school. My mom, Shirley Edwards, is a Yale Hospitality Head Pantry worker. She got me the job. It was fun; I met a lot of interesting people. I worked a lot of events—balancing large trays of food while moving quickly through a crowd is not easy! I learned from that experience to always try to make to best of every situation.

What is your favorite childhood memory?
Growing up, I had a close group of friends in my neighborhood. And after a snowstorm, we’d have some epic snowball fights. One time we started throwing ice at each other, and well, I have a nice scar on my face to show for it!

Best advice you ever received and from whom?
It was from my cousin Jerome. He said, “Don’t ever give up on what you are trying to be because you’ve still got time to learn and be that person.” In other words, don’t ever up on yourself. When I’m uncertain about things, this pops into my head, and I keep at it!

What do you like about working at Yale?
I like my current position and love what I do. There are three other apprentices in the program, and I enjoy working with all of them. Our current manager Brian Page is great and constantly teaching us something—a new problem to work on or an older piece of equipment we may need to understand. Sometimes we have to shadow other workers, and we will come across a problem and feel informed because Brian is such a good teacher.

Biggest challenge of working at Yale?
I’m enjoying being an apprentice. I like looking at something and determining how it works and what is needed to fix it. At first, getting used to the program was challenging because it was all so new, the work, the people. But now it’s great. I would say the most challenging thing is getting up so early; my shift starts at 5:50 a.m. But I’m used to that now also.

Favorite hobbies?
In my free time, I love playing video games. Lately, I’ve been playing them more and more with my daughter. I like any of the games that have a mythical theme. I’m a big Game of Thrones fan, so my current favorite game is God of War. With my daughter, we play anything that has dinosaurs in it. When I was younger, I took my old Xbox apart; it was overheating, and I fixed it.

How has COVID affected your work routine?
We had to get used to wearing a mask every day. If we’d go into a building, we had to worry if it was under quarantine or not, especially the dorms. It was a little scary in the beginning. But it is much better now with so many people getting vaccinated. Things are finally starting to get back to normal.

Favorite gadget?
My phone. It is how I stay connected to the world.