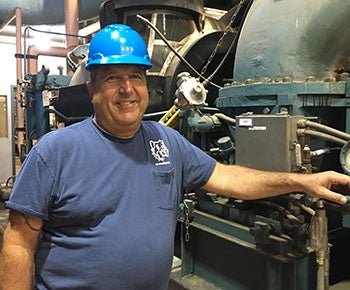 Roger Vandal, utilities shift engineer, has been at Yale for 30 years, and currently works in the Sterling Power Plant at the medical school. He is responsible for keeping the plant operating, monitoring all its machinery, and triaging any breakdowns or issues as needed. When he is not inside the plant looking for leaks or faulty mechanicals, he is helping provide disaster relief in areas hit by hurricanes, tornados, or floods through a non-profit group called Team Rubicon.

Team Rubicon unites the skills and experiences of military veterans with first responders to rapidly provide relief to communities in the throes of large-scale disasters. Roger, who grew up in North Haven, Connecticut, did a three-year stint in the U.S. Navy back in the early 1980s. After boot camp, he worked in the boiler room of the aircraft carrier USS Coral Sea. His military status and current skill set made him a perfect recruit for Team Rubicon.  Yet he found out about the group by chance.

After Hurricane Sandy hit the east coast in 2012, Roger volunteered to help clean up damaged houses in Rhode Island. That experience wet his appetite, and wanting to do more, he simply Googled “disaster relief volunteering” and found Team Rubicon. Before his first assignment, he took some mandatory FEMA training courses. Since 2018, he has been deployed to North Carolina to help with relief efforts aftter Hurricane Florence, and to Panama City, Florida - following the devastating Hurricane Michael. Most recently, he went to Houston, Texas to help construct homes for the elderly and families who did not have enough insurance to rebuild after Hurricane Harvey hit in 2018. “Panama City was the worst. People lost everything, and many of the older residents can’t rebuild and have nowhere to go. It was incredibly sad. There was nothing to save, they just brought in bulldozers,” said Roger. 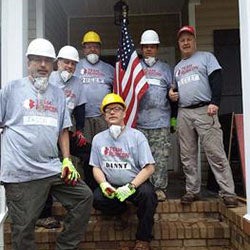 Most of the time Roger and a team of volunteers will primarily do cleanup. They go in after the emergency is over, when both the weather and water have receded. “We do everything from mucking out homes, to stripping wallpaper, removing sheetrock, and getting rid of mold, ruined furniture, etc.,” he explains. “We also patch roofs, and have a crew assigned just to cut trees. We don’t restore anything, just clean up the wreck so the families can hire someone to rebuild. And it is all free through Team Rubicon.”

Each deployment consists of a group of people with different skills. It’s tough, dirty work and always bittersweet for the volunteers. “To see the devastation is just overwhelming, and the sadness of the people who’ve lost so much, but then at the same time getting a hug or thanks from them. Many of them are just happy to be alive. It’s an emotional experience, and the best thing I’ve ever done,” said Roger. 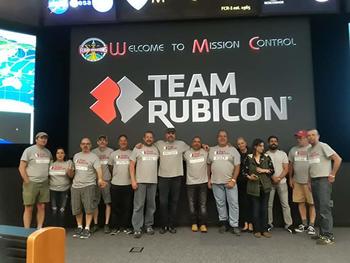 Not only does Roger get to help people, but he meets other volunteers from all over the U.S. Roger shares, “Sometimes we are working with military commanders, Air Force pilots, doctors - but toward one goal, and everyone gets dirty and sweaty. At the end of the day, we talk over dinner, share experiences. Then its lights out and roll call in the morning.  It’s run like the military.”

Team Rubicon coordinates the teams and trips, pays for their airfare, hires caterers to feed everyone, and provides buildings with sleeping cots, mobile bathrooms, and showers.

When he finally takes some time for himself, Roger loves to ride his motorcycle in his hometown of Wallingford, and proudly tends his many flower gardens. Once relaxation kicks in, he always finds himself thinking  about his next deployment.

Thanks Roger, for helping others!