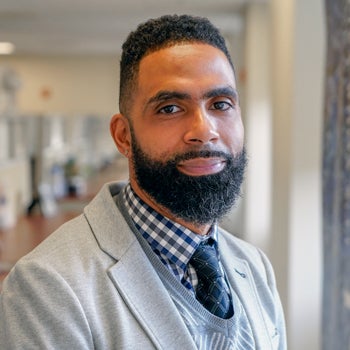 “Continue to evolve constantly—let today be the day you give up who you’ve been for who you can become.”

Ron Lipkins, director of HR Innovation and Strategic Support, uses these words to describe his view on life. His belief that life evolves has helped shape his personal and professional path.

Ron describes his upbringing as one of overcoming obstacles and sometimes becoming derailed along the way.  He grew up in Queens, New York, in the 1980s, one of four children raised by a single mother, and seeing daily the influence of poverty and what he refers to as the “drug era” of the 1980s in New York City.  Ron had ambitions and knew he wanted to find a path to success.  He became the first in his family to attend college, enrolling at Virginia Tech, with a focus on Psychology. He had the grades and intellect to get into college, but in a pattern framiliar to many who are facing the world alone for the first time, he found himself making poor decisions, choosing to party rather than study. He quit school and with few prospects found himself living out of his car. At an all-time low and seeing many of his friends and acquaintances losing their lives due to poor decisions, he knew he needed to get out of the environment.  He left rural Virginia and moved back to New York to be near his family.

After moving back to NY, Ron took odd-jobs to support himself before landing a full-time job at an automotive shop. He credits this job, and a particularly wise and kind cashier, with setting the wheels in motion on his professional journey.

Ron moved to Connecticut and took a job at an HMO, working on reconciliations before moving to the Compensation and Billing department. It was in that role that he learned how to automate processing to simplify his work—a skill he grew to love and one that would prove essential in his future career. It was also in this role that he met a friend and colleague who would change his career path forever. To this day, Ron asserts, “as part of my journey, I always give thanks to this person because if it weren’t for us dreaming in the break room about what we could one day become, or her faith and belief in me, I would never be where I am today.” In fact, this colleague believed in Ron so much so that she submitted a resume for an IT position on his behalf, while the unsuspecting Ron was hundreds of miles away on vacation, thereby starting his journey in the IT realm.

After 12 years at that company, surviving thousands of layoffs over two years, Ron was one of only three original staff members remaining, and felt like a “stranger in the house he helped build.” He knew it was time to move on and decided to leave, becoming, as he calls it, “temporarily retired” for some time.  He knew he wanted to stay in IT but also wanted to incorporate other areas of interest, such as sports. After countless applications with organizations such as ESPN and Yale, and numerous rounds of interviews, his search proved daunting and unsuccessful. Deflated and discouraged, he decided to move back to NY to try his hand on Wall Street, but fate had other plans for him. Before packing his bags he received a call from the Yale Staffing office, offering him a one-year fixed duration position in HRIS (Human Resources Information Services). Ron jumped at the opportunity and joined Yale, simultaneously receiving a degree in computer information systems. Two years later he was running the department. His takeaway from this is, “Once a door is opened for you, run through it, do not walk. Take that opportunity to showcase your skills and what you have to offer.”

Ron now serves as the director of HRISS (Human Resources Innovation and Strategic Support). He describes his role as “not only a manager of systems but also a manager of dreams and wishes.” He refers to his team as artists who start with a blank canvas and paint a picture— helping to make others’ jobs easier by finding solutions using technology. His day-to-day job is managing administrative systems that departments use for hiring, talent, learning, and recruiting, but what truly gives him gratification is knowing that he and his team help colleagues by streamlining their processes and freeing them from administrative burdens.

Ron is thankful for the opportunities that he has had at Yale, and the career development that these opportunities have created. Yale has put a spotlight on his skills as a leader, allowing him to use what he’s learned professionally and personally to teach others. By participating in leadership programs like MOR (Maximizing Organizational Resources), Ron has been able to reflect on the type of leader he wants to be and how he wants to progress in his personal journey. He has also been able to showcase strengths he never knew he had, such as public speaking. He has now presented across the US, in front of hundreds of IVY League peers, something he would have never done had it not been for his experience at Yale.

To Ron, a true leader is “someone who inspires others to dream more, become more, and do more.” He believes that being an inspiration to someone else is the best leadership trait one can have. “A true leader wants nothing more than to make the individuals on their team shine on their own. It’s all about coaching others to allow for their brilliance to show. As a true leader you need to be genuine, responsible, open to change, and have integrity and empathy.”

What did you want to be when you grew up?
I wanted to be a writer. I’ve always written poetry on the side to express my thoughts on everything from love, loss, the challenges we face, etc. I often think about publishing my work one day. My collection would be called Come Take a Walk with Me and would detail my life through short stories and poetry.

If you ask me now what I want to be when I grow up, I would say a cast member on Dancing with the Stars. So, if anyone out there is offering free dance lessons…

What is the first thing you would buy if you won the lottery?
The first thing I would buy would be a sail boat to cruise the Mediterranean. The second thing I’d do would be to invest in schools in underprivileged areas, to give those schools an opportunity to offer curriculum to help kids gravitate towards things they love today but can also have a career in. For example, my eight-year-old nephew loves video games but that could lead to a passion in technology. I’ve shown him how to code so now he’s beginning to learn how to code his own games. I’d love to sponsor a school to not only help kids in STEM learning but also to show them where technology is heading and teach them to be engineers and data scientists—the future leaders of tech.

If given the chance to switch jobs with anyone else within Yale, whose job would you want?
Easy— I would love to be a researcher in the Department of Computer Science where I can work on building solutions to solve complex tasks through the use of artificial intelligence.  To work on research that could help improve the world today and for future generations to come would be awesome.

Tell us something most people don’t know about you.
I love fashion… OK—most people probably know that. I’ve been riding motorcycles for over 20 years. I ride for enjoyment and reflection. It’s a form of meditation for me.

If you could be famous, what would it be for?
I’d like to be the first person to visit Mars… Or one of a few at least.