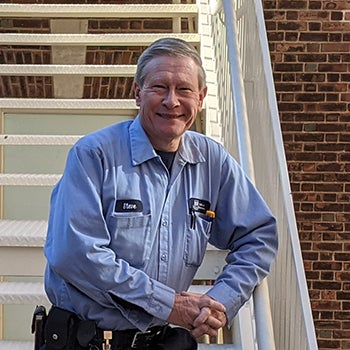 Stephen Senick takes pride in his work and the relationships he’s developed over the years with Yale colleagues and management. This fall, he celebrates 45 years of service at Yale. Currently, he works in General Building Maintenance (GBM) first shift on the medical school side of campus and is also a member of the Joint University Health and Safety Committee. In four decades, many things have changed at Yale, including the addition of computers and other modern technologies, new buildings, and more students. What hasn’t changed is the heart of Stephen’s job, which includes providing excellent customer service and trying to make things better than when he found them.

Stephen grew up in New Haven, graduating from Wilbur Cross High School. His father was an electrician, and his mother worked for 30 years in Yale’s dining halls. During high school he worked at Yale part-time. After graduating from Sacred Heart University with a B.S. in Business Administration, Stephen joined the banking industry and stayed for 13 years, focusing mainly on loss prevention, collections, security, and special assets. While watching many small banks get bought out by large conglomerates, he decided to make a career change. Stephen had continued to work part-time at Yale even with his full-time job, and now decided it was time to ditch the shirt and tie and make Yale his full-time and only job.

Today, as a GBM he maintains nine buildings on Yale’s Medical School Campus. Stephen still lives locally with his wife and stepson and cares for his elderly parents.

We talked to him via phone recently about his Yale career.

What was your first job at Yale?

While I was going to high school, I worked as a part-time dishwasher in the Kline Biology Tower (KBT) dining hall. My mom, who worked in and retired from Yale dining halls, got me the job. When I went on to college, I continued to work full-time in the dining halls as a head GSA (General Services Assistant). After graduation, I started a career in the banking industry and became a member of the American Bankers Association and received an advanced banking-specific degree from the University of Oklahoma. All the while, I continued working at Yale on Friday nights and on the weekends.

What’s kept you here for over four decades?

The banking industry was going through significant shifts in the late 1980s and early 1990s. So, I decided to apply for full-time work at Yale. It was the best decision I’ve ever made. It was hard initially because I had basic maintenance skills and had to learn quickly other skills to do my job properly. The GBMs are unique at Yale. Many of us have worked together for over 30 years and started here part-time or in the dining halls. It is a wonderful group of people. I feel like we’ve grown up together. We are the front-line workers for building issues and dealing directly with the departments.

There are many advantages to working at Yale, the benefits, comradery; there are some challenges. But I’ve never been afraid to broach issues with management, and I even helped create a committee of my peers to deal with issues as they come up. There is always a level of respect between workers and management, even if we don’t always agree.

What are your day-to-day responsibilities?

Our duties range from a clogged toilet, leaky ceiling to a major flood. Often the call is unique. I was called to a dormitory room many years ago, and the student had research materials that belonged only in a lab. I’ve come across many situations. Roof and ceiling leaks are a big thing. We replace a lot of ceiling tiles. I take pride in the fact that we can get the job done quickly, and the department or lab can get back to normal in a few hours. A big part of my job is customer service, dealing with students, custodians, or deans. I’d like to think I’ve been helpful and respectful during my career.

What are some of the most significant changes you’ve seen around the University?

There is a lot more communication coming down to the employees from departments and management. Human Resources provides a lot more support and is much bigger. It used to be two employees in one room, so it’s grown quite a bit. Dining halls were always like a big family. When there was a personnel problem, you’d go to the head cook “Pops” who handled it or gave advice. While Yale seems much larger now, that family network is still the same. We take care of and support each other. The GBM committee that I work on was created to take care of staff members, giving them a voice, keeping things even between workers and management. Oh yeah, automation and LED lights are fabulous too!

What is your best memory?

In 2014, Hillary Clinton was here speaking at the Yale Child Study Center during the presidential election. I got a call that a door to the holding room she was in wouldn’t close. I got clearance to work in the room while she was there waiting to make her speech. She greeted me, we had a brief conversation, and I quickly fixed the door and left. It’s not every day you get to meet a former Secretary of State and Senator!

What advice would you give someone coming into Yale as a new employee?

Take advantage of every opportunity for advancement, even if you are currently working an entry-level job. Also, take advantage of any educational opportunities, be it taking training classes or college courses, as Yale provides partial reimbursement. We want people to advance through the system and give jobs to current employees. If new or current staff take advantage of learning opportunities, it will be easier to apply for and get those better positions.

I really enjoy my job and work with a great group of people. Even though sometimes I don’t agree with management, I feel they respect my position and my peers. Because of COVID we are down a few people, and we’ve been working closely with management to work through this tough time. For me, if I can do the physical work, I will keep working. When I do retire, it will be an active one. I’m not one to sit on the front porch in a rocking chair.