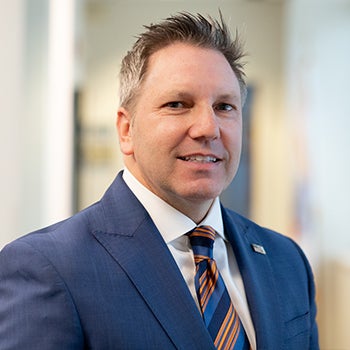 Steven Woznyk’s job is to keep people safe. It’s a heavy responsibility, but he is always smiling, kind, and willing to help whenever needed.

As Assistant Police Chief at Yale, Steve is primarily responsible for overseeing the Investigative Services Unit, training and professional standards, and the Dispatch Center. Additionally, he is responsible for ongoing labor relations issues.

Steve was born in Montgomery, Alabama, on the Maxwell Air Force Base, where his father was stationed at the time. A few years later, the family moved to West Haven, Connecticut, where Steve spent his formative years. After graduating high school, he enlisted in the U.S. Air Force, following in his father’s footsteps. After completing active duty, he decided to pursue a career in law enforcement and served as an officer and then a sergeant on the New Haven Police force. Steve credits his time in basic training and the police academy with giving him a valuable and unique perspectives and the opportunity to meet and work with some extraordinary people.

When I was 14, my brother and I worked the overnight shift at the Athenian Diner on Whalley Avenue in New Haven. We bused tables and worked in the kitchen. My mother also worked that shift, so we would accompany her on Friday and Saturday nights.

On the weekends, our whole family would go to Riverside Park in Agawam, Massachusetts—it’s now Six Flags New England. I have vivid memories of all of us piling into the family station wagon and hitting the road. We’d ride the Thunderbolt and Wildcat rollercoasters, it was a lot of fun. I remember those days like it was yesterday. When it changed hands and became Six Flags it was never quite the same.

My two favorite hobbies are motorcycles and drums.  I got my first dirt bike when I was about 12 years old.  We used to ride motocross style on the property that is now Yale’s West Campus.  Back then it was Miles Laboratory, and the property had lots of trails and mounds of dirt that were great for dirt bike riding. Today, I still own a vintage motorcycle and like to go out for rides—no more motor cross. Also, I’ve been playing the drums since I was a teenager, and I still enjoying playing today.

I enjoy spending time away with the family, watching my youngest daughter perform at dance conventions—the best times when we are all together.

What is the biggest challenge today of working in Public Safety?

The term “business as usual” is never really applicable in public safety, as the landscape is ever changing. There is a necessity and a high demand to keep up with current trends and sustain a strategic approach to providing communities with the highest level of public safety services possible.

Words of wisdom for people just starting in their career?

Be focused in your pursuit, whatever that may be. It can be a rollercoaster ride but if you stay focused and work hard great things will happen. Just be patient, as it may take some time to get to that end goal.

If you weren’t working in public safety what other job would you have?

I would have enjoyed practicing law. I believe I can make a good argument for something I believe in. Also, I find the study of the law to be very interesting.  As a young man, I had dreams of being a paid musician. Playing the drums in a band performing at large venues, that would have been a great job.

What was your first car (and what happened to it)?

My first car was a huge, jade green, 1978 Lincoln Continental. It was my mother’s car. I had my license for three weeks when I got into an accident and smashed the front end pretty good. After that, my mother gave me the keys and said it’s yours. I drove that car throughout high school without ever getting it fixed. It was a great car. I eventually gave it to my brother who drove it until it died.

My iPhone. It’s amazing to me that from your phone, you can get work done, search the Internet, listen to music, and have virtually any type of information available at your fingertips. We like to think we can do without it, but can we?