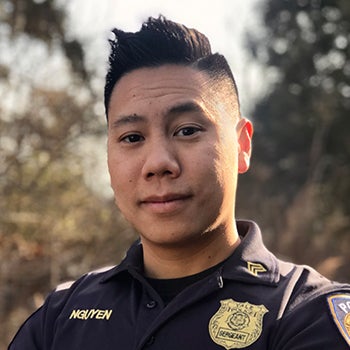 eant Thomas Nguyen-Phuoc brings patience and understanding to his work as a police officer. He deeply values being part of the Yale Police Department (YPD) and the wider Yale community. He has been with the department since 2007. Over the years, Tom has gained perspective and learned valuable lessons about human nature and the many facets of police work. At times, it’s been an unexpected journey involving situations and emotions not fully expected.

Born and raised in Connecticut, Tom graduated from Notre Dame High School in West Haven. When he was 16 years old, he worked at a dentist’s office across the street from the Hamden Police Department (HPD). Ever curious and slightly awed by their uniforms, Tom would go over and talk to them, and his interest in that profession grew.

During his senior year of high school, he worked as an intern at the HPD. After graduating from high school, he took courses at Southern Connecticut State University. He continued his internship at the HPD, learning about community policing, dispatching, and even went undercover to help with underage alcohol investigations.

Tom met his wife who also works for Yale, at a restaurant Tom’s parents managed in Branford. She heard the YPD was hiring and encouraged him to apply. Tom was only 22 years old when he became a police officer. Now a Sergeant, he sat down with us to answer some questions about his life and career.

I was a receptionist at a dental office in Hamden. My mom got me the job. The dentist was a good-hearted person, and I observed how the office ran and how he handled patient relations. It was a good experience—because I realized it wasn’t for me.

My dad rented this big van and piled my family and a bunch of our cousins into it, and we road tripped to Disney World in Florida. We had more fun spending time with each other than doing all the typical Disney stuff. What I remember most is how hard my parents worked, sometimes up to three jobs, to give us a good life—including that crazy, fun trip.

When I joined the police force, I met Paul Bicki, he was an officer with the New Haven Police Department. He talked a lot about policing and the importance of being compassionate towards others. He would say, “you won’t understand it now, but in the future, you’ll get what I mean.” As a young officer, you think you can change the world. But as the years go by, you begin to understand people and situations better. Your compassion gradually builds, and you realize not everyone is bad, they’ve just made bad choices.

What are some of your favorite hobbies?

A few years ago, my wife and I started doing photography. I enjoy the time we spend together doing it. We’ve now branched out to doing videography, which is great fun.

When I first got into policing, I understood chasing criminals and that aspect of it. What I didn’t brace myself for was the emotional interactions with victims during a crisis. You go on a call and try to deescalate a situation. You will spend extended amount of time as the person tells you their story, and it stays with you. People become police officers to help individuals. In many cases, you realize you can’t really help them. It’s tough to cope with or understand when you are in your 20s. You don’t get closure. Many of us often wonder what happened to that person. Did I help them? After years of doing this, you are either haunted or hardened by it. But you push through to the next call.

Your favorite thing about being a police officer.

On the flip side, it’s the many good relationships that we build daily, with our fellow officers and with the Yale community. Those positive interactions have stayed with me, and I’m a better, more diversified person for it.

Words of wisdom for people starting a career in law enforcement.

Be humble. You will face many unexpected situations and emotions. I believe a lot of young officers start off thinking they can solve everything. It’s not possible. Be prepared to listen, many of your interactions or calls will involve just talking. Sometimes people just want to be heard.

If you weren’t a police officer, what would be your dream job?

I’d want to be a helicopter pilot. I have a fascination with flying.

My drone. It is my outlet to flying.

What was your first car and what happened to it?

It was a 2001 silver Honda Civic. That was the year the first “Fast and Furious” movie came out. I added a loud exhaust and drove that car around really fast. I would race out of the parking lot after school. The engine finally blew from pushing it so hard.