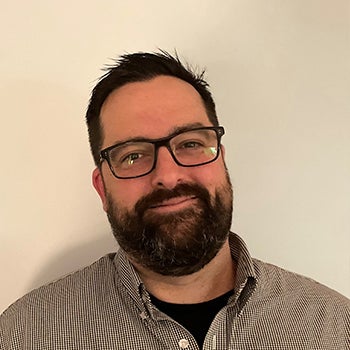 Tim Hinckley and his team had many successes this past year. As Director of Student and Academic Support Systems (SASS), Tim manages a staff of 29 information technology professionals. Notably, to accommodate learning during the pandemic, the team developed and implemented a compliance and reporting framework that allowed students to successfully return to campus, continue learning remotely, and be compliant with Yale’s pandemic guidelines.

Tim was born in Warwick, Rhode Island, and grew up in Clinton, Connecticut, where he and his three sisters attended school. After graduating from Rensselaer Polytechnic Institute with a B.S. in Information Management Systems, he worked as a developer in Fairfax, Virginia. After deciding that they wanted to live closer to family, Tim, his wife Stacey, and their eldest daughter Kailey moved back to Connecticut in 2000. Their family expanded when their second daughter, Leah, was born in 2002. The family settled in Southington, where they have lived ever since.

He landed a job at Yale as an IT programmer analyst and a few years later moved up to a senior software engineer supporting Yale’s Student Financial and Administrative Systems (SFAS). During those years, he supported multiple applications such as Banner, the University ID System, and the Dining System (Odyssey). After taking a brief hiatus from Yale, he returned as a technical lead on the Enterprise Applications SASS team. His responsibilities included managing a team working on YaleHub, YalePay and Faculty Grade Submission.

Tim then applied and was promoted to a director’s position during the pandemic. “What we’ve accomplished over the last year is staggering and I am eager to return to Yale and lead our amazing team in person,” says Tim.

Tim spoke with us recently via Zoom about his career, managing a large team remotely, and how successful the past year has been despite its many challenges.

What do you and your team manage?
The mission of the SASS team is to support the applications and systems used by the Yale community to maintain academic processes and student life. As the director of SASS, I have been focused on collaborating with stakeholders, improving the student experience at Yale, and modernizing the team’s technology platforms. Besides Banner and Canvas, we support over 50 applications and over 100 integrations.

What was your very first job?
In college, I had an internship at Pratt and Whitney in Middletown. At the time, they kept their engine-building operation sheets entirely on paper. I worked with the mechanics, took digital photos as they built the engines and then merged the photos into a digital version of the instruction manual.  The final step was to train the mechanics on the new system used to display the operation sheets.  I was this college-aged kid working among 30-year veteran mechanics who built complicated aircraft engines. I’d roll the computer out onto the factory floor and teach them how to use the new system - many using a computer for the first time. The resistance was strong, so I had to figure out how to break down walls, create relationships, and build trust.

How has the COVID-19 pandemic impacted your work?
When students returned to campus last fall, we had to prepare them for a remote learning experience. We wanted to figure out how to put a framework around where the students lived and how they were studying. The team developed “learning location” software which assigned coded locations based upon the student’s remote status, with pandemic compliance attributes built into each code. With this system in place, students were able to come to campus and continue learning safely, and we were able to track that they were compliant in this process.

I continue to be amazed by how the SASS team has adapted and what they have accomplished while working remotely. Over the past 15 months, we have rolled out new systems and integrations to support the Return to Campus initiative and delivered on several project commitments – all while keeping up with our daily operational work.

What is the best advice you’ve ever received?
It was from my father. When I was looking to return to Connecticut from working in Virginia, he said, “Apply to the open position at Yale. It’s a great place to work with good benefits, and it’s located in an amazing city.” When I first interviewed at Yale in 2000, I had other offers that I was considering. So, I asked my father for advice.  He said, “you’d better take that Yale offer!”  I’m glad I did. 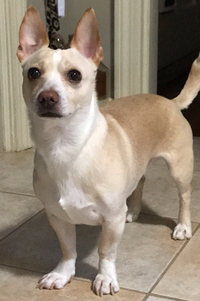 Great family memory
Some years ago, I dropped my daughter off at the bus stop. When she opened the truck door, a small, stray dog jumped in. The little deer-headed chihuahua and terrier mix sat on the center console like he had been there forever. We adopted him and named him Frank, and we have made great memories as a family of five.

Fun facts about you
When I was in high school, I was invited to try out for a major league baseball team.  During the tryout, after giving up a long homerun to left field, a Boston Red Sox scout mentioned that professional baseball was probably not in the cards for me.  He said that if I worked hard, I could make an excellent college pitcher. During my baseball pitching career at RPI, our team went to the NCAA College World Series, I received the GTE Academic All-American award, our pitching staff led the country in ERA, and I set a career win-loss record of 25-4 (which is still intact!).  After college, I continued to play baseball for various teams in Connecticut.  I capped off my baseball career in 2018 playing for the Wolcott Colonials in a 40-and-over wooden bat league.