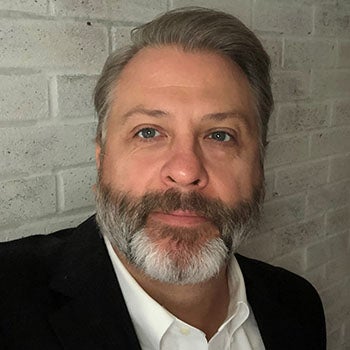 A fast and secure campus network is vital for the Yale community to work, teach, and research. Ensuring that reliable network service for thousands of people and devices on the campus is Tim Sheets, Director of Network Services, and his team of engineers. They manage the day-to-day operations of all the university’s wired and wireless networks. Also, as part of ongoing network development, Tim and his team are implementing a multi-year project called Next Generation Network (NGN). This new network will provide Yale with a more modern, resilient, and secure network.

Tim was born in Elgin, Illinois, and is the youngest of four children. His family moved to Trumbull, Connecticut, when he was 12. After high school, he joined the U.S. Navy. During his eight years of active and reservist duty, he was stationed in California. He worked as a Hospital Corpsman at the Naval Air Station Lemoore in the maternity ward and the emergency room the first few years of his service. After becoming a reservist, he was called back to active duty during Operation Desert Storm and served with the U.S. Marines at Camp Pendleton, working in the brig (or military prison).

After the Navy, Tim got a job with the former A.C. Nielsen as a marketing manager. This company was known for its Nielsen ratings, an audience measurement system for television, radio, and newspaper in specific media markets. Tim worked strictly measuring and tracking commercials, their activity, and verifying marketing trends for certain brands.

In the early 1990s, during a recession and tight job market, Tim wanted a career change and realized computers and technology were his next move. A friend had started a company in his basement. After reading tons of books on Cisco Systems, taking a Nortel networking certification course, and passing the exam, Tim started to work for him as a network engineer. Together they “brought it out of the basement” and eventually supplied internet and security systems to over 1,500 community banks throughout the northeast.

The decade before Tim came to Yale, he worked a for a healthcare organization that focused particular attention to persons living in poverty or most vulnerable. Tim was the Regional Network Manager and National Network Engineering Manager managing day-to-day operations while also introducing new technologies and developing standards.

Now at Yale for five years, Tim enjoys its beautiful campus, the many rewards and challenges of his job, and working somewhere where he can make a difference. “I love Yale; it’s a great place. One of the things I’ve tried to do in my career, and why I went into healthcare, was I wanted to be part of a community. I didn’t want to work in the corporate world. There is a lot of good happening here at Yale, and I want to be a part of it. If my team and I can make a difference by supporting the data network and making it more reliable for all here to teach and research better and faster, that’s a good goal,” says Tim.

What did you learn from your first job that you apply today?

The U.S. Navy has an excellent infrastructure and processes that work wonderfully. During my career there, I got a good perspective on how operations run and work well. They have written procedures for everything from driving a battleship to cleaning a room. It was an interesting experience and taught me a lot about structured processes.

When I was 10, I was part of an all-star baseball team. My dad was one of our coaches. The whole team got to go to Wrigley Field to watch a Chicago Cubs game. They played the Montréal Expos. Our other coach knew one of the Cub’s players, so before the game started, we got to go on the field and meet some of the team. It was a wonderful day, and I remember it vividly. My dad even caught a foul ball!

It was my first day. I was excited about coming here, and I’m still happy to be here five years later! I came in early so I could drive through campus; it was in July, so a sunny warm day out. I’ve always loved New Haven and I couldn’t believe, as I was admiring the unique architecture, that I was starting as an employee at Yale. I’m sure throughout my career here I will have many other great memories, but that was special.

Do you have any advice to others looking to come to Yale or further their Yale career?

When I first came here, I received some advice and I find it is true today. Yale is about relationships. I would suggest to someone working here or just starting here to go out and meet as many people as you can. There are some great people here. Also, you will never truly understand what is happening here at Yale without getting out and finding out what they are doing. I’ve been here five years and feel I’m just scratching the surface.

What don’t people know about the Yale network?

Yale is a very diverse entity and an open environment. We have various processes and entities, from a police dispatch center, to credit card processing, to complex research, and so much more. All of this requires moving and/or storing lots of data that needs to be communicated properly. Also, across campus, there are different types of devices, from computers and phones to large telescopes or microscopes. These devices also need to communicate and connect with the network efficiently and correctly. My team is responsible for all that data connectivity. With the NGN project, we are building a more secure and resilient system to handle all of the above. It is pretty exciting.

Tell us some fun facts about yourself that others might not know about?

During my Naval career, I have assisted with over 30 live births. A U.S. Naval Corpsman is akin to a registered nurse. But we can do a lot more in the military, like delivering a baby, that sometimes a registered nurse could not do in a civilian setting. Those births I assisted with included several twins and C-sections; it was definitely interesting.