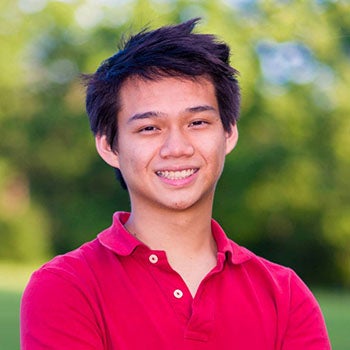 Victor Liu, Data Center Analyst, joined ITS and Yale’s Data Center Facilities Management Team in March 2021. He and his teammates manage the physical environment of Yale’s vital IT infrastructure. Some responsibilities include commissioning and decommissioning IT equipment in Yale’s data centers and monitoring power and cooling systems in critical IT spaces on campus —including all the telecom rooms. Although early in his career, his experience exemplifies how being agile and adaptable is an invaluable trait to possess – no matter what your intended vocation.

Originally from Columbus, Ohio, Victor graduated from Yale College in 2018 with a Bachelor of Science degree in Computer Science. Passionate about education, in 2019, he enrolled in a teaching certification program to become a math or physics teacher. However, when the COVID-19 pandemic struck all his classes, and more importantly, his upcoming student teaching, moved online. Though he was still on track to obtain his teaching license, he thought that was not an effective way to train to become a teacher because he felt that so much about teaching involves being physically in the classroom. Because of this, he decided it was not an ideal time to enter the field and instead opted to pivot into a career in IT by leveraging his technical background. He liked working at an educational institution and grew to love New Haven during his time as a student, including two positive student employment experiences – working in IT at both the Macmillan Center and the Yale University Art Gallery.

During a recent chat, Victor talked about how his undergraduate experience helped him in his current role and shared what he loves about his job and working at Yale.

I worked as a waiter at a sushi restaurant in my hometown. The biggest lesson I learned that still resonates today was the importance of good customer service and treating people with kindness regardless of their attitude. I think everyone should have some experience in the service industry, as I still carry the valuable lessons I learned from that field with clients, vendors, and coworkers today.

How did your Yale student experience influence your current job?

I had a much greater knowledge of the physical campus going into my job than the average new Yale employee, never needing to learn how to navigate myself around campus. It feels very nostalgic finding myself working in many of the old buildings I used to frequent, and helpful to know some of the hidden gems - e.g., free ice cream from the Chaplain’s Office in Bingham Hall. As an undergraduate, I held many student jobs, working for theTrumbull College Dining Hall, Yale Conferences & Events, and my two IT student jobs. I really came to appreciate all the work the staff of the University does to keep it running. In a way, it led me to have gratitude and want to give back.

How have your leaders supported you and ensured your success in your role as a Data Center Analyst?

I’m very grateful for my manager, Charlie Queiroga. He’s always let me take the initiative on new projects and doesn’t micromanage. Letting me set my own schedule allows me to learn to prioritize the different responsibilities that I have on a day-to-day basis.

How do you see your role connecting to the mission of Yale?

Yale is a world-renowned research university, and its different labs and groups all use our servers and IT equipment to run their applications. My group commissions and decommissions a lot of these systems – and that directly impacts the mission of the university to pursue those research ideals.

How have your leaders supported you and ensured your success in your current role?

Recently, Frank Mathew organized a new monthly “Getting to know Yale IT” meeting and lunch for all the newly hired college graduates. This experience has helped me expand my network with other people of the same age and in the same stage of their career, and get to know different ITS leaders and what their groups do. This was especially useful during the pandemic, as it was hard to meet people in the office.

What have you learned about yourself from your recent IT experience?

I enjoy doing work physically on campus rather than remotely. I also feel much more comfortable now about how all these components (e.g., data centers, critical IT spaces on campus, etc.) fit together in our network. As for working in IT right now, I find working with so many different groups and departments to be very rewarding. I enjoy getting to know the many different faces of Yale, as well as the vendors and contractors we work with.

What are some of the challenges of your job?

We have a relatively small group - just three people, including myself in my immediate team; the broader Data Center Operations group has about ten people - overseeing all campuses at Yale. It’s a lot to keep track of.

What would you be doing if you weren’t working in IT or teaching?

One career that I’ve always fantasized about is the streamers making millions of dollars playing video games online. I think it’s an interesting career that requires a lot of luck and a good personality. Maybe I’d be doing that in some alternate universe or perhaps after my retirement from an established IT career.

What would you recommend a new Yale employee check out in New Haven or on Yale’s Campus?

I’m a big fan of going to concerts and seeing live music. I would recommend catching a show at College Street Music Hall, the Space Ballroom (Hamden), and Toad’s Place. I’m excited to be going to my first show at the Westville Music Bowl. Also, there are student concerts at Woolsey Hall and other student performances elsewhere on Yale’s Campus.

The moment my dad got me my first gaming console – a yellow Gameboy Color. Somehow, he discovered I was being teased at school for not having one, so he came into the classroom to give it to me in front of the boy who had been teasing me. It’s one of my earliest memories and started my love for gaming that I still have today. My dad is not a gamer, so I feel fortunate that he let me do my own thing and wasn’t too strict with me.

Spring Fling 2016. I was on the planning committee and hospitality team for this annual music festival that year and helped to select the lineup of Vince Staples, A-Trak, and Janelle Monáe – all artists I love. I hosted Vince Staples and A-Trak and got to hang out with them and their crews before their shows.

Can you tell us a few facts about yourself that most people don’t know?

I’m very lucky to be a cancer survivor and had a wish granted by the Make a Wish Foundation as a very young child. My parents had just immigrated from China, and their firstborn (I’m the oldest of three boys) got sick - I can’t believe what they had to go through; I feel blessed.

I also have two brothers with whom I am close with – one of them just graduated from Yale this past weekend; my other brother will be a junior at Carnegie Mellon next year. I’m very proud of them and recently celebrated with them at the recent commencement weekend; we went to New York City to celebrate, caught a taping of The Late Show with Stephen Colbert, and ate a nice fancy Italian dinner.