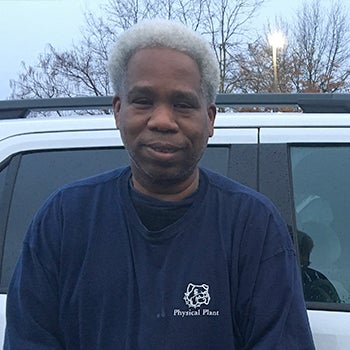 The year was 1975.  Kingman Brewster was Yale’s President, the School of Management did not exist yet, and the Yale Center for British Art was under construction. That same year a 16-year-old local high school sophomore, William Felder, Jr., started working part-time on weekends in the former Calhoun College (now Grace Hopper) dining hall.

William’s father got him a job working in the kitchen washing pots and dishes. At that time, William Felder, Sr. was an executive chef in the Trumbull College Dining Hall. The Felders were a large family with 12 children. “My late father was well respected in the Yale community. One of the managers asked him if he had any sons at home who could help on the weekends. So, my brothers and I started working in various dining halls on campus. After high school, some of us got full-time jobs,” said William Felder, Jr., general building maintenance, Physical Plant. William’s father worked at Yale from 1953 until his retirement in 2000.

In addition to William, several of his family members work at Yale or have recently retired. This includes William’s mother Ida Mae, who worked at the Yale Child Study Center as a custodian until her retirement in 2009. Currently, three brothers (Alan, Larry, and Bruce), one sister (Linda), and a nephew (Brandon) all work at Yale. According to William, together, the family has over 250 years of combined service.

William has many great memories of his family and their Yale connection. “As a family, many times we’d go to Yale football and basketball games together. My happiest memory at Yale is when I transferred to the Physical Plant department.  It meant a lot to me; I feel blessed to work here,” said William. Though, what he is most proud of is his father.

William, Sr. also started as a pot washer and worked his way up to executive chef.  “My dad had a lot of great recipes and loved cooking for, and interacting with, the students. He told us that when President John F. Kennedy visited Yale in the early 1960s that he was asked to cook for him,” said William. “My father was a very special man.”

Thank you, William, for your many great years of service and for sharing this wonderful family story!