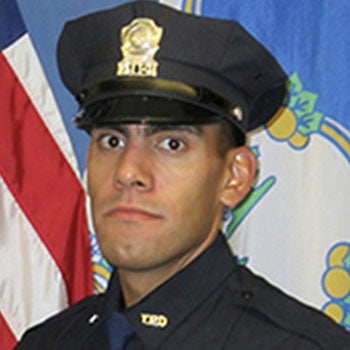 Yale Police Officer Ariel Melendez sets the bar high for himself and those around him. At Yale since 2012, he recently became the Yale Police Department’s Chaplain in addition to his patrol duties. It’s a work in progress, but Ariel felt there was a need for fellow officers to have a spiritual outlet or just someone to listen.

Born and raised in New Haven, Connecticut, Ariel is the middle child and the only son. Both parents worked in law enforcement; his father was a New Haven Police Officer, and his mom a judicial marshal. After high school, he attended Porter and Chester Institute studying automotive technology. He had his heart set on becoming a race car driver. He had worked on a short-track race team during high school, but he soon realized that wasn’t the right path and began teaching martial arts and worked part-time at a local elementary school.

As a teenager, he practiced and excelled at karate, earning his black belt and becoming an assistant instructor. He taught dynamic martial arts for six years and planned to open his own school when his sister became a New Haven Police Officer.

Spurred on by her decision, Ariel did some research and discovered Yale was hiring. Almost nine years in, he’s quite happy with that decision. He currently works the midnight shift as it gives him time with his fiancé, their combined families, and time to get things done. In addition, he is the Yale Police Department’s first chaplain.

Some years ago, he had read that other police departments had chaplains and about the many positive benefits. Feeling it almost a calling, he talked to leadership for approval and then got credentialed. It’s a work in progress, but he gladly offers peer support to department members and their families. “Sometimes they just want to talk to someone, and I’m a good listener. It is confidential and a valuable thing to have in a police department, especially today,” said Ariel. We caught up with him via Zoom to talk martial arts, police work, and NASCAR.

I don’t consider myself a competitive person. But when I first started doing martial arts, I’d attend tournaments that were coincidentally held in Yale’s Coxe Cage. The first few years, I didn’t score well. Later on, I earned a first-place trophy in the event that included 33 competing schools. I also earned second place in a different division. Those physical trophies are long gone, but the memory of that is still pretty awesome.

What was the best advice you ever received, and from whom?

I expect a lot from people and myself. The best advice I received was from my fiancée. She said to worry about yourself and your actions. Your actions will have a ripple effect on those around you and will resonate more with people than words. Give it your all, but don’t always expect a lot in return. In that way, you won’t be disappointed, or you’ll also be pleasantly surprised.

What do you find to be the most challenging aspect of working in public safety?

As a police officer, you often interact with individuals who may not trust you. This could stem from what they read in the news or from personal experience. I wish I could sit down with a panel of officers and people from the public to let them see we are simply human beings. It’s hard when you wear a uniform. That is what they see. We want people to have positive interactions with us. When I train new officers, I stress that a large part of their job is dealing with people. When you forget that aspect of policing, you will no longer be effective at your job.

What do you enjoy most about being a police officer?

I enjoy meeting people and, in some cases, randomly helping them. I’ve found that we are more approachable on foot or on a bike versus being in a car. I’ll get random questions about the best pizza place or where to park. I’m pleased to help and answer questions. This is not police work, but at the same time, a big part of what we do, and I take pride in that.

If you weren’t a police officer, what would be your dream job?

I’d be a NASCAR driver.

It was a dark blue 1988 Volkswagen Golf. It was a mess. The back doors didn’t open. It was a five-speed with no radio, heat, or air conditioning. A friend gave it to me for free. I had it towed to my house. At the time, I was in trade school and was able to work on it in class as a project car. I got it running. After a few years, I ended up junking it; it was not safe to drive.

Tell us some fun facts about yourself.