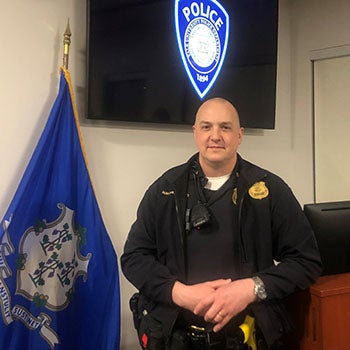 Sergeant Chris Halstead’s life mission is to help people. As a U.S. Army Captain and now a Yale Police Sergeant, Chris is courageous, compassionate, and dedicated. A strong work ethic was instilled in him by both parents, particularly his father, an airline pilot and former U.S. Naval pilot, who served in the Vietnam War.

Born in St. Paul, Minnesota, and educated in Pittsburgh, Pennsylvania, Chris considers West Hampton, New York, his hometown. Growing up, his family spent the summers on its beaches swimming and sailing, where his parents eventually settled. After graduating from the University of Rhode Island with a B.A. in English and a short stint in the U.S. Coast Guard in Alaska, his career path took an unexpected turn.

During his senior year, the 9/11 attacks on New York City happened, and he had family and friends who lost loved ones. After college, he joined the U.S. Army, did two tours in Iraq, and ended his military career as an Artillery Captain. Ramadi and Adhamiya, where he was assigned, were high combat areas. Chris is proud that he took care of the people in his units and didn’t lose anyone. But he saw great suffering by the Iraqi people. He was wounded in a firefight and still feels the effects. 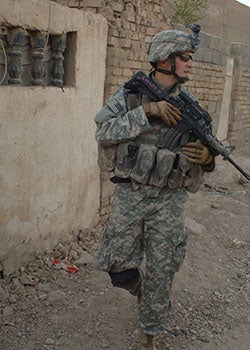 Newly married, he realized an army career didn’t fit with having a family. After returning home from Iraq, he and his wife settled in Connecticut, where she grew up. Police work seemed to be a good fit given his background, so he applied to the Yale Police Department and was hired as a patrol officer in 2009. Chris worked the midnight shift for many years, and in 2014 was promoted to sergeant. He and his wife now have two children Arwyn and Finley.

Chris still works the night shift and recently took some time to speak with us via Zoom about his life and career.

Growing up, we spent summers in Long Island, New York. When I turned 14, my dad said, “you can now legally work and need to get a job.” I got a job as a dishwasher at a gourmet food store in West Hampton Beach. It was a dirty, thankless job, and I had to figure out a work ethic. It was tough, but it shaped me.

Those summers at the beach, we belonged to the Quantuck Beach Club. A small place that all the same families came back to each year. I loved the ocean and just being there.

I understand you volunteer a lot.

I coordinate a twice-yearly local blood drive and support other Yale Police sponsored events. I think volunteering is essential. I want to set an example for my kids. Many people struggle and don’t have enough food. I want my kids to see that and learn from it. I’ve recently volunteered to donate a kidney to a man in New York. I heard about this and understand he has an 11-year-old son. If he doesn’t get the kidney, his kid will grow up without him. They are screening me for a match now.

Best advice you ever received and from whom?

My grandfather once said to my uncle, “if you see anything bad happening, turn and run.” My uncle told me this went through his head the morning of 9/11 when he entered the Twin Towers’ lobby and heard an explosion. He ran out the door and down the street for blocks. When he finally stopped, he turned to see the buildings on fire. For some reason, I’ve always thought of that. Of course, you could inadvertently run in the wrong direction. Luckily so far, I haven’t.

Some of your favorite hobbies?

I brew beer, make wine, mead, and sake. I just started doing this and have found it is not easy. Yet, it is one of my favorite things to do when I get a chance.

What is the toughest thing about working in public safety?

Knowing that people with who I have contact might not see beyond my uniform. A person may be having the worst day of their life, and we are there to help them. But on any given day, they see the uniform, and there is more to me than that.

What is the best thing about working as a police officer?

The best part of my job is helping and supporting people in the community and my team. It’s always rewarding to help someone, even with the smallest thing, and see how truly grateful and surprised they are to receive that help.

Words of wisdom for people starting a career in public safety.

Family always comes first. In some way or another, this career will be a sacrifice. It is not a nine to five job. It’s tough to have a family and not have control over your work schedule. You will also see and experience things that you may take home with you, which will affect you emotionally. Be aware of that and make sure you have an outlet.

If you were not a police officer, what would be your dream job?

I’d want to be an astronaut on the international space station. I was always fascinated with aerospace travel and technology. My mom’s family works in the aerospace industry. Her dad was a flight surgeon in the space shuttle program.

It was a black Nissan Frontier truck; I had when I lived in Alaska. I beat that thing up. I used to take it ice racing on the local lakes and reservoirs. Crazy fun, especially at night. I sold it before I moved back East.