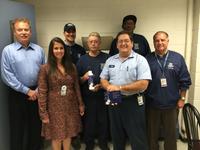 Recently, team “fantastic four” that runs the West Campus Warehouse & Receiving area received a group #outofthebluethanks!  In the past year the population at West Campus has swelled to over 1300 people causing a sharp increase in storage requests, mail and packages.  So much so that the 250,000 square foot warehouse is almost full.  This team works diligently often going above and beyond to keep their customers happy and in return received several thank you notes from staff members including one from Vice President Scott Strobel about Peck Place Graduation. His email stated “Great job by everyone, not just yesterday but throughout the whole semester.” Support Services Director Don Relihan wanted to recognize the whole team who he said “runs on auto-pilot, extremely loyal and customer service oriented.”  Besides their gifts they were treated to a delicious lunch.

Yale Administration has implemented a new program to engage and thank staff members. This new program called #outofthebluethanks was recently launched and these are the first staff awards for Support Services. These mini-ceremonies are preceded by a letter or phone call complementing a staff member for a job well done.

Congratulations to Fred, Frank, Al and George keep up the great work!