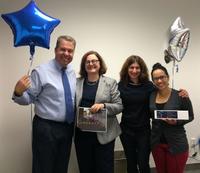 Yale Administration, under whose umbrella Graduate Housing sits, has implemented a new program to engage and thank staff members. This new program called #outofthebluethanks was launched over the summer, and these are the first staff awards for Graduate Housing. These mini-ceremonies are preceded by a letter or phone call complementing a staff member for a job well done.

In this case, George received a letter from the children at Esplanade Apartments thanking him for “keeping them safe.”  George had worked quickly with his staff and facilities to have some speed bumps installed on the driveway leading to the parking lot.  With the letter was a photo of several happy kids standing on top of the new speed bump waving.

Melanie was lauded for her help translating the New Haven Hiring Initiatives brochure into Spanish.  Deputy Vice President Janet Lindner sent a letter saying that “this was not part of Melanie’s job but how she had gladly offered her assistance.”  She continues with “because of Melanie’s tremendous efforts, we now have a final brochure that we are proud of!”

Unlike other #outoftheblues, this was a real meeting that we interrupted.  George and Melanie were happily surprised and humbled by the gifts and recognition.  Janet Lindner, Deputy Vice President for Administration and Human Resources was there to thank them personally. It was especially surprising for George because he knew we were coming for Melanie but had no idea he was also getting recognized.

The Graduate Housing Staff is a tight knit group of hard working, caring individuals who make the lives of Yale’s Graduate students better, easier, and happier.  And it was nice to be able to take a moment to recognize two of their staff members!

Congratulations George and Melanie!  You make us so proud!