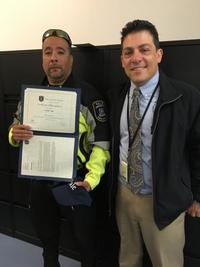 Congratulations to Yale Security Oﬃcer Carlos Vega who received a commendation & #outofthebluethanks (his 2nd!) for his outstanding service to the University. Several members of the Yale School of Medicine complimented Oﬃcer Vega for his “helpfulness & concern for the safety & well-being of all the pedestrians that pass his patrol post daily.” It was noted that because of him many individuals (students included) were stopped from crossing the street into oncoming traﬃc while texting at the busy intersection of S. Frontage and York Streets!

Oﬃcer Vega’s courteous and professional actions resulted in positive interactions with the public and is an indication of his character, training and experience, and the caliber of personnel employed by the Yale University Security Department.